I have been volunteering at the SPA for over four years now, and I thought I had seen and heard just about everything. But today I truly feel stunned and amazed. And very happy.

On 26th February the SPA welcomed four dogs whose owner had died. All of them were small and varied in age from 2 to 12 years. All but one of them is identified in the name of the recently deceased owner. So as is customary, we sent a letter to the owner of the fourth dog to the address on the database in Paris.

And guess what? The owners came to collect Charly today. They live in the Herault and their dog had disappeared from their garden there almost eight years ago. Yes, you read that right. EIGHT YEARS! They just couldn’t believe the news (or their luck) and after several phone calls back and forth (checking tattoo numbers, exchanging photos and descriptions), they hastened to Carcassonne to collect Charly. I am not usually at the SPA on a Friday, but I couldn’t resist, and it was one of the most wonderful things I have seen there: Charly recognised them!!!

I guess we will never ever know how Charly came to be living with the woman in Carcassonne. He is 10 years old and has been missing since he was two and a half! I cannot imagine the emotions of either Charly or his owners. I think of all those people who are still looking for their dogs years after they went missing, and those who have given up hope and are no longer looking. And how they would feel if a letter arrived to tell them that their long-lost friend was at a refuge.

I was a bit teary, to be honest. But I was not the only one!

Yet again the benefits of identification are clear! Even if it took eight years for Charly to be found. In fact usually a vet will check a dog’s identification on the first visit. And Charly had been well-looked after, there is no doubt. He has even been castrated during his “missing years”. We have no idea why his tattoo was not checked, but the main thing is that Charly is back at home and is, as we speak, getting reacquainted with his family. This includes a young master (who was a toddler when Charley disappeared) and two doggy friends, one of whom Charly knows from before!

The couple have promised to send us photos and I for one cannot wait!

If you find a dog, please give his owners a chance to find him. Ask a vet to check to see if he is chipped or tattooed, even if you would like to keep him for yourself. Imagine how YOU would feel if your dog was lost and you had no news of him.

Other refuge news can wait till tomorrow; today is Charly’s day!

Charly. Nine days at the SPA, but missing for eight years before that! 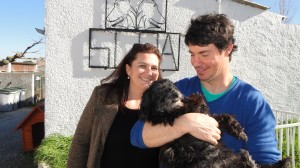 2014-03-07
Darcey Dyson
Previous: Internet brings love!
Next: News from the UK and arrival of Gizmo, complete with torture collar.