A home for Charlie!

The morning started off badly, with the arrival of yet another puppy. However at least for this boy the day ended better, as Shirley took him home to foster. She did such a wonderful job with Loli, but understandably needed some time to regroup with her own pack before taking on a new pup.

I hope it is not too long till he finds a home, as towards the end of September Shirley is off on holiday, so some puppy juggling may have to take place! However this little guy is going to stay small, and pups like this tend to go quickly.

One pup who wasn’t lucky enough to be fostered but who found a home thanks to people visiting the SPA is lovely little Swing. The lady who found him visited him frequently and was heartbroken to see him behind bars. However it didn’t take him long to catch someone’s eye, and less than a month after arriving, off he went. Puppy Andromeda, wasn’t fostered either, and today he was the first of the “Star” litter to leave, just ten days after his arrival. So there are advantages to being at the SPA in some ways.

Puppies are not the only ones who get fostered. Some of our oldies are lucky enough to be looked after out of the heat and noise of the refuge. Such was the case for 11 year old Charlie (aka Caramel) who was abandoned at the SPA following the sad death of his owner at the end of May. Volunteer Jane couldn’t bear to see him behind bars in the intense heat, and took him home. However it quickly became apparent that Charlie, a single dog all his life, much preferred to remain that way.

Ron and Brenda have fostered for us before a few years ago, but they felt they were now ready to get back on the horse, with a dog of their own. Thanks to the internet they saw Charlie who was just what they were looking for, and off he went.

Another adoption was that of Leonie, who has been with us since the end of July, having been found straying. Today she has a new home!

You might think that today was an excellent day at the SPA, and in many ways it was. However we had four arrivals; 3 puppies (from different litters) and one adult.  So we are back to where we were this morning!

EXCEPT….EXCEPT…..We have had THE reservation that we have all been hoping for. You will LOVE tomorrow’s blog! Don’t miss it whatever you do! 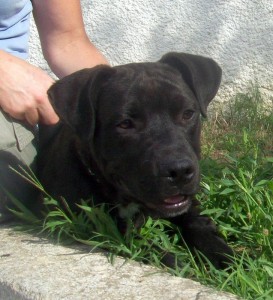 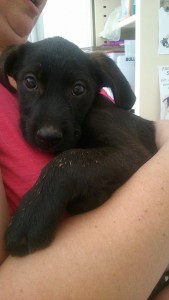 Charlie – ADOPTED (thanks to his foster mum, Jane) 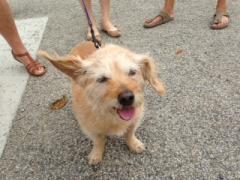 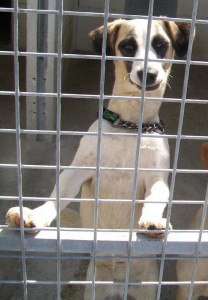