A Home For Harley!

Well this has certainly been a week which we will never forget! Yesterday Darcey told you about Goudas adoption and today I have even more good news…Harley has a home to call his own, he was adopted today!!

Harley arrived at the refuge in February last year.  The refuge is a stressful place for dogs and the noise of 130+ dogs is enough to push the most balanced dog over the edge and poor Harley did not cope well with refuge life. He hid at the back of his kennel, much too scared to venture to the front to greet prospective adopters! On his walks away from the refuge a very different dog emerged and ever so slowly we began to see the relaxed , affectionate side of Harley. It was heart breaking to then have to return him to his kennel but such is the reality of life for far too many refuge dogs in France.

When Harley was adopted earlier this year we were all over the moon and so happy for both him and his new mum. Such elation was however short lived and he was returned to us a few weeks later as he howled and barked when left alone. His new mum lived in an apartment and her neighbors were not impressed with his constant barking whilst she was at work.  Luckily James and Rebecca, a super young couple who volunteer for us agreed to foster Harley whilst we looked for a forever home for him.

When dogs are fostered it gives us the perfect opportunity to assess their needs and Harley did have specific needs! He really didn’t like being alone,only really relaxing when right at someone’s side and also became a bit reactive on the leash whilst near male dogs. We also discovered that he really didn’t like rabbits and as James and Rebecca have 3 house rabbits we thought it prudent to move him to another foster family as quickly as possible!.  Lucie, her hubby and 3 children are one of our most experienced foster families and we were delighted that they agreed to look after Harley. Lucie also has a young Beauceron pup and numerous cats so Harley was in for lots of fun!  He settled well with Lucie and having her dog for company did help his separation issues but Lucie was going back to England in July and they couldn’t take Harley with them. The thought of Harley returning to the refuge was just too much and once again James and Rebecca stepped up and fostered  him whilst we looked for a home for him!

Dog Links is an organisation in France which connects dogs in need with people looking for a dog. This is a God send  for refuges like ours and Evelyn  from Dog Links worked tirelessly searching for a family for Harley and her hard work has certainly paid off!  Bill, a recently retired gentleman who has not long relocated to France read about Harley and today, after many chats, photos and emails Bill came to meet Harley.

Like estate agents say there is a buyer for every house, Bill has proved that there is an owner for every dog. It was love at first sight and apart from popping out to the shops for groceries there will be no need for Harley to be alone ever again! Bill too needs a companion, someone to share long walks with and he cant wait to have Harley curled up on the sofa beside him at night. Bill has no more desire to leave Harley than Harley has to be left so its really a match made in heaven. After a long chat and a nice walk off they went, happy to be together. I am sure Harley will agree that such a future was well worth the wait! 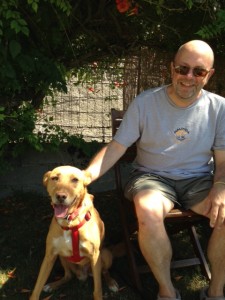