Okay, money is exchanging hands and beers are being bought to settle bets. Last night Moira told us that of the five dogs who left for the UK, the first to be reserved is ….(wait for it)… HOOD! Yes, just one week after he arrived, this fabulous dog has found his new family! So that answers the question as to who will be the first to leave.

I was going to see if we should take bets on who would be next, but it appears that as soon as one of the SPA Carcassonne dogs is available for adoption (following castration and evaluation of behaviour) he is reserved. I say this because today Galileo was put up for adoption and he, too, was reserved immediately!

So NOW will you believe us when we say that the SPA Carcassonne has the best dogs in the world?!

Despite some nasty-looking clouds, the rain held off this afternoon, and volunteers tried to walk the dogs who had not been walked this weekend. We welcomed a newbie, Sylvie, to our team, as well, and she soon found her feet thanks to Anoushka who showed her the ropes.

Of the five dogs who arrived (sigh), four were identified. The owners of Tommy  had already contacted us on Facebook to tell us he was missing, which is always a good sign. The two spaniels should leave tomorrow. Not sure about the border collie. He is clean and appears to be well cared for until you feel how thin he is.

The non-identified dogs, a puppy, has been named “Pigeon”, for reasons that will be obvious if you are familiar with the French expression “to treat someone like a pigeon”. The people who abandoned this puppy seriously thought we would believe their bizarre tale about how they found him. We were not born yesterday. I just hope the novelty of the other Christmas presents they got last a bit longer.

The refuge is very full……..

Tommy- RECLAIMED (thanks to his microchip) 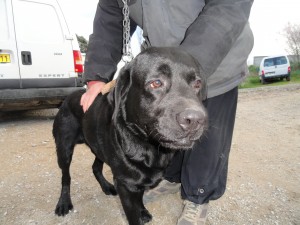 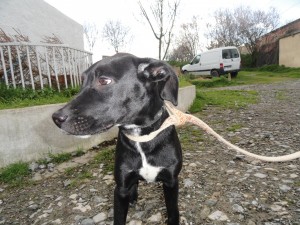