Home / Latest News / Adoption of an oldie and information that may be useful to some.

Adoption of an oldie and information that may be useful to some.

Here is a question that is frequently being asked, both on the SPA Facebook page and on this website. “WHAT DO I DO IF I FIND/HAVE FOUND A DOG THAT I WANT TO KEEP?”

Several people have contacted me to tell me of their heartbreak when they have been “forced” to give back to its owners a dog which they have looked after for several months. This applies to dogs that are identified (by either microchip or tattoo). A non- identified dog can be identified  in your name immediately by any vet, although I think it is only fair to at least attempt to find the owner by informing your local SPA and the local Mairie, and maybe even putting up posters locally, but that is a matter of discretion.

For an identified dog there are two possibilities. You either bring it to your local SPA, who will either keep it for ten days and then call you to come and adopt him properly (let them know you want him, though!). Some SPA’s (like the SPA Carcassonne) will often let you keep the dog at your house, but it is worth bearing in mind that you can become terribly attached in 10 days, and so sometimes it is best to leave the dog in the refuge, especially if you have children.

The second option (and if you don’t want to pay SPA adoption fees), is to take the dog to a vet and request that he notify the SCC (Societe Central Canine) in Paris that the dog has been found. This gives the owners a chance to find him, and is ultimately the reason for getting an animal identified. If they haven’t contacted the SCC to reclaim their dog after 15 days, ask your vet to change the ownership details. This will cost you a whole 5 euros!
Advantages of going via the SPA are that we will vaccinate the dog and do the paperwork etc, and if you want him/her castrated/sterilised, it tends to be much cheaper via a refuge, as they get a good rate at the vets. However the other route is perfectly legal!
In refuge news, another fabulous adoption today, that of Tesson, who is eleven years old and has been at the refuge since May 2012. He was but one of several elderly German Shepherds at the refuge, and we are delighted that he has found a home. His adopter selected Tesson several months ago, but was unable to adopt him until his own dog passed away, so whereas we are happy for Tesson, we know that his freedom is only due to the death of a much loved pet. Bitter sweet.

We wish him a long and happy life and hope that our other elderly German Shepherds are as lucky. Remember, we ask just 80 euros for a dog of 9 years or over, and this can include castration/sterilisation if required! Please consider adopting a golden oldie!

Tesson who was adopted today! 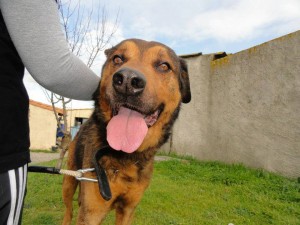 2013-07-26
Darcey Dyson
Previous: Two adoptions and Darcey lays a curse.
Next: Room for a little one?