Adoption of Cortex and Polochon

Today saw the adoption of two dogs, and by coincidence both of whom arrived with siblings or other family members.

First off was Cortex. He arrived with his brother, Minus at the end of January. These dogs had been found as strays in a local village, and it seems clear that they were just pups who had got too big. They are great lads, though, and with regular walks and love at the ScPA were soon showing how well behaved they could be in the right hands. Minus was adopted last month, and we are pleased that Cortex has not had long to wait.

His new family have been to walk him a couple of times before and came along to test him with their dog today. Everything went well, and at just over one year old, Cortex’s new life has begun! 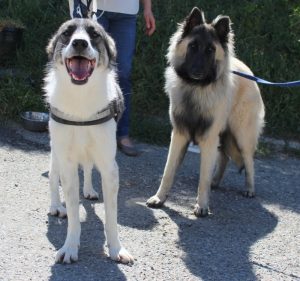 Cortex – ADOPTED (with his new pal)

Next to leave was Polochon. This teckel cross is the fourth of the five dogs who were brought in in mid-April by a family who lost their home. Just Aria left now, and we hope she will find a new home too, as she is fabulous. But back to Polochon. He was the most nervous of the dogs, and has come on in leaps and bounds since his arrival. This is thanks to staff and volunteers, and also to the dogs with whom he has shared his kennel.

His new family has a border collie and three cats, plus a small human. Not only that, but one of his new adult humans is at home all the time,  as they work in shifts. Oh, and their dogs go on holiday with them too, so lots of adventures await little Polochon. 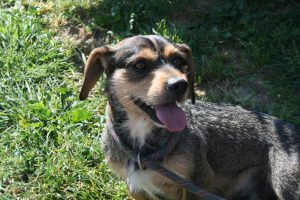 So it was a wonderful day for two dogs and for all the others who were walked in the bright sunshine on this May Day bank holiday. 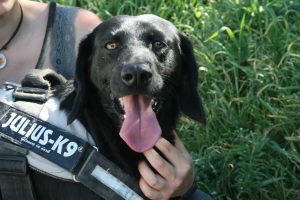 This is beautiful 7 year old Aria, who is the last of Polochon’s family to remain at the ScPA

2019-05-01
Darcey Dyson
Previous: Adoptions of Goliath and Fossette
Next: Adoption of Puppy Érable and Mia