Adoption of Duchess, Barney and Pimprenelle…

Today I was up early to walk my dogs and then leave for the refuge for 8am to collect Duchess who I took on day 1 of her journey to a lovely family in Prevessin Moens, near Geneva. I handed her over to Muriel, one of our long-time supporters and tonight Duchess will stay with Muriel and family who will take her all the way to Prevessin Moens tomorrow.

We know Terri and Michael, Duchess’ new family well as they have already adopted two dogs from us.  The first was a very handsome collie cross called Dyson and the second was a lovely griffon cross called Aimee. Both these dogs are now at rainbow bridge, so it was great news that they were not only adopting from us again but trusted us to choose their dog for them!

Duchess has no idea what a great active life awaits her in the Alps. Terri who works part time has cleared her schedule for the whole of July and August to settle Duchess in. I can’t wait to see photos of her in the mountains.

Muriel and her mum and dad have transported lots of dogs for us. They also have one of our older dogs Woofie ( ex Tayson) and are very experienced handlers. Many thanks to them for giving up their time to help us out yet again! 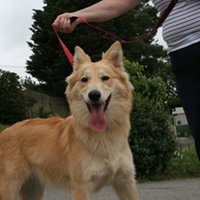 This afternoon Barney was adopted by a super couple who live near the coast. They have only been in France a couple of months and they too are very experienced doggy people. In the Uk they ran a home boarding facility. They came to us for a doggy after losing their older Labrador just before coming to France. Barney now has the chance of a happy settled life which is very different to what he has been used to. Once he is settled they will adopt a friend for him……what a lucky lad! 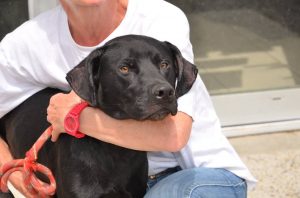 The next to leave was puppy Pimprenelle.  She arrived with her sister Nicky who will now be alone. Lets hope that she doesnt have too long a wait! 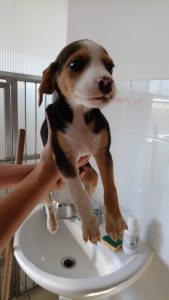 On a not so good note, little Candy is back. This little pinscher arrived at the the refuge with 2 pups Sugar and Spice. She was adopted quickly but this was not to be and so is once again available for adoption. 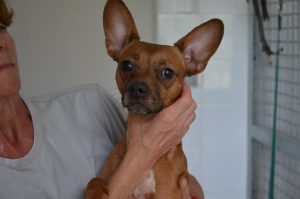 Candy is looking for a new home.