Adoption of Dyson, Sally and Pomelos

Today we had three adoptions and all of them really good ones!

We are delighted to say that Dyson, our magnificent 4-year-old Cursinu cross has been adopted. He arrived in March when his owner became homeless and wanted Dyson to have a better life than they could give him. A very selfless act as Dyson was really loved.

It soon became very apparent that Dyson was a fantastic dog. He was fine with other dogs and cats and had nice lead manners. You would think that he would have been snapped up right away, but he wasn’t, in fact, no one seemed to notice him at the refuge!

DRC decided to make him our urgent appeal and we posted him on various social media groups. This really helped and we had 3 people wanting him.

Tracy and Jackie who adopted Barney, a stunning black Braque cross about 10 months ago, came along today to meet him and see how they got along. As one of the employees said the introductions were ‘impeccable’!

He will make a great playmate for Barney and we will have lots of news. We are sure that his first owner would be delighted with his new life! 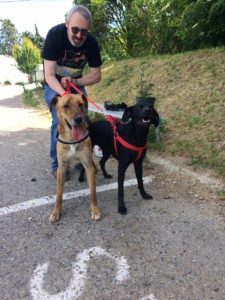 Next to leave was little Sally.  Sally arrived as a timid young girl who hasn’t seen much of life. She cowered when approached and really needed a quiet home where she can regain confidence in humans again. Luckily she didn’t have a long wait and today she left with her new family. 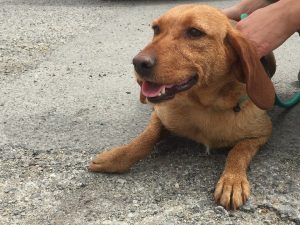 The third adoption was that of puppy Pomélos. When he was the last pup of the litter volunteer Daniel took him home at night so he wasn’t lonely. But pups get under your skin and the thought of them at the refuge or with another family is sometimes too much to bear. So today Daniel adopted him….I am so pleased for both of them!

2019-05-23
Moira
Previous: Four Great Adoptions, including that of Patty!
Next: Offering a home to Kazou….