Adoption of Fidgy and Gimby

Today saw two more lucky dogs leave the refuge. By coincidence both of them had been brought in by their families for rehoming, so in both cases the ScPA knew quite a lot about the dogs. In addition neither dog had been at the refuge for very long, making these dogs doubly lucky.

First to leave was Gimby. He is a three year old pedigree golden retriever who was brought in exactly one week ago. His family was moving house, and although they found a home for their other dog, a German shepherd, Gimby was not as lucky. Today his luck changed. Or rather yesterday, which was when his new family, came to meet him, complete with their two golden retrievers! Introductions were made, and everything went well; Gimby should be very happy indeed with his new life. His new family are already well known to Audrey, recent adopter of Griff, and we will doubtless have news and photos of the ever expanding dog-walking group! 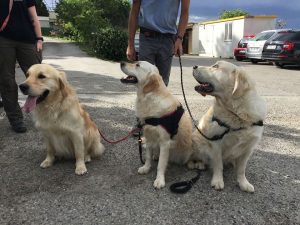 Gimby (left) with his new family

Next to leave was Fidgy, who is the eldest of the five dogs who were brought in for rehoming and whose “friends” Myrtille and Naya were adopted yesterday. Leaving Figdy really broke the couple’s hearts, and I can see why. A nine year old beagle cross, she is a bit round of girth, very gentle and smiley and just a fabulous elderly lady.

Well today she found an elderly gentleman (of the human variety) with whom to start the next phase of her life. He had recently lost his long term companion and came to the ScPA to look for a new elderly dog to shower with love. And who can blame him for falling for the charms of Fidgy. Certainly not me, or anyone else who has met her since her arrival two weeks ago. It is a rare thing for a dog of this age to leave so quickly, but Fidgy is truly special, in the way that only a beagle (or an almost-beagle) can be! 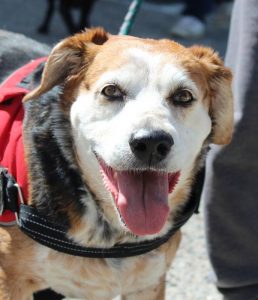 So two wonderful adoptions on this Friday afternoon. Now bring on the weekend, the dogs are ready and waiting!