During a day of mostly bad news (five new arrivals), we are delighted to tell you that little Frimousse was adopted, just three days after her arrival following the death of her owner. It is always sad when dogs arrive, but even more so when they do so in such circumstances.

Frimousse was one of the dogs from Ste Eulalie, who arrived almost two years ago from a dog-hoarding situation. Being so young at the time, Frimousse was one of the first to be adopted. So naturally she was traumatised to find herself back at the SPA, especially just before some of the worst weather we have seen in years. Luckily for her a lovely couple was looking for a small dog, one that wouldn’t pull them off their feet on a walk, and who wanted a calm and peaceful life. They recognise that it will take Frimousse some time to get used to her new home, but they are kind and patient, and Frimousse is a very lucky girl indeed, especially when you bear in mind that some of her former companions are still at the SPA, waiting for their first real home. 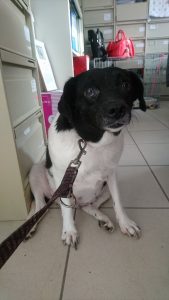 There was a reservation today, so some more good news is on the horizon.