Home / Latest News / Adoption of Gala, and Canaille is a Champion!

Adoption of Gala, and Canaille is a Champion!

Today little Gala left for her new home. She had lots of interest, and many people will be disappointed that they were not selected as her new family. In the end it came down to a question of how much time people would have available during the first few months, which is a crucial period in the development of social skills, and also how badly people insisted on a small dog. Originally it was thought that Gala would be about 7kg as an adult, but as this now appears unlikely to be the case, it was best for her not to go to people who specifically wanted a tiny girl!

If you wanted Gala and were disappointed, please don’t despair, unfortunately there will always be more pups. And in fact one of the Frozen litter was brought back today…Sadly Elsa’s family are unable to keep her for professional reasons, so although she will not be as small as Gala when she is adult, Elsa will be a lovely companion nonetheless.

Now how about our lost dogs? Yesterday’s escapee, Nadja, is close to her home, so not LOST lost, just too nervous to come closer. Her owners are wisely letting her approach at her own pace, leaving food and bedding out for her in the barn and the conservatory. As for Boss and Ondine, both are still missing. However we know someone who can help! Or at least he could if he were closer….

Ex SPA dog  Canaille, who was adopted in Belgium thanks to Animal Trust, has become a qualified search and tracker dog. Yesterday he won a trophy, showing his prowess at helping to find missing dogs and people. This looks like a great activity, and I think it is the first ex SPA dog who works in this domain. Congratulations to both him and his owner, Sofie. What a life Canaille has had since leaving us! 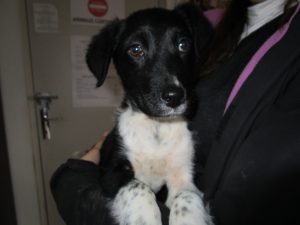 Three month old Elsa is back 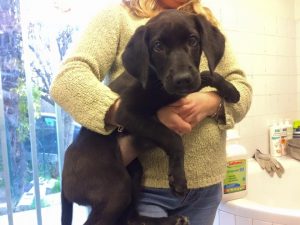 And Canaille is a Champion 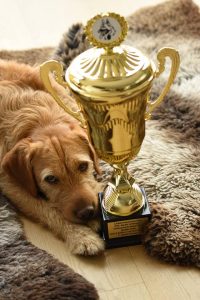 2017-02-07
Darcey Dyson
Previous: Meet Max..a home to home success!
Next: Adoption of Tag and Nadja is back home