Adoption of Gordon, Fiona and Mexico!

Today was a great afternoon at the refuge. It was warm with a nice breeze and I was just coming back from walking Ernie when I noticed a lovely couple who came to have a look around on Monday.

Its always positive when people come back for a second time.  They were interested in Nimo who behaved very well with them on a walk but Nimo is a bit of an escape artist and he is easily bored so we thought that he would benefit from having another dog in the household.

We suggested that they try walking Gordon our Gordon Setter and they loved him. They popped to Jardiland to buy supplies whilst we sorted our his vet certificate and gave him a brush!

He jumped in their car happy as anything and we will soon have news of how he is doing! 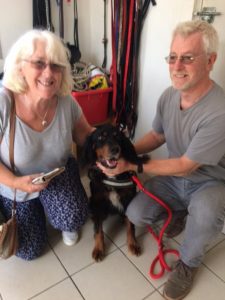 Many thanks to both the UK adopter and an association in Belgium who offered Gordon a home. As he arrived as a stray he couldnt travel for 3 months as is the law when travelling via TRACES.

Next to leave was Fiona who had hardly spent any time at all with us. I dont even have a decent photo of her! 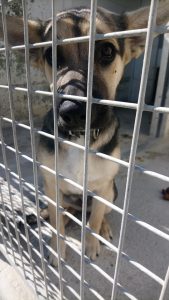 Last to leave was messy Mexico. He arrived as a scruffy stray but instantly became a real favourite with staff and volunteers. We loved the scruffy look but he was a bit smelly and very matted so we appealed for a groomer to give him the once over. We could hardly believe our eyes when he came back!  Today was his lucky day and off he went to his new home! 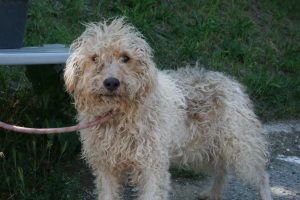 So a lovely afternoon with three adoptions and tomorrow I think another one of my favourites is leaving!