When Kyklos first arrived, back in early February, we all thought he would leave very quickly. Not only is he a great looking lad, but he seemed to be the perfect dog; he didn’t pull on the lead and was very well behaved. As time went on, the frustration of being young and full of unexpended energy made him appear a bit unruly, but staff and volunteers have always known that there was a wonderful dog in there, just waiting for the right family.

In fact the woman who adopted Tyson last week initially came in to meet Kyklos, but found him a bit too energetic for her. But as is so often the case, after months of no one showing any interest in a dog, it was just his turn!

Some of you might remember Hyde, a young and quite timid shepherd cross who was adopted in December 2016. Well today Hyde and her family came along to select a new pal, and it is they that have adopted Kyklos! Isn’t that wonderful?

We are really delighted for this lad. He arrived when he was still under a year old, and it has been a long six and a half months wait for him, but Kyklos’s new life starts as of now. Many thanks to his new family, and we look forward to news and photos. 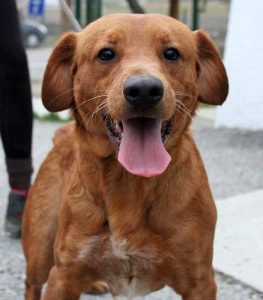 More good news is on the cards for tomorrow, so watch this space!