Adoption of Marla and more baths!

Today was baking hot, so instead of walking, there was a team of dog washers at the SPA this afternoon, giving dogs a spruce up so they can look (and smell) their best for any potential adopters. Washing dogs can be great fun and is a good way to get to know them, as we can see who is and is not happy to be manipulated (which in turn might indicate who is best homed with children etc). Plus it is great fun, for humans and dogs alike. It is important to wear quick dry clothing, though! Those darn dogs have a habit of shaking just when you don’t want them to!

Six dogs are now feeling a lot cooler, tonight and in a couple of cases a lot less uncomfortable, as “Team Bath” did some cutting of dreadlocks and brushing too. Thanks to you all!

A couple of people did come a long with a view to adopting dogs, and we are hoping that some of these may come to fruition and help make some much needed space at the refuge. Summer is far from over, but people are starting to return from their holidays and can think about giving a dog or cat a home, without the expense of putting it into kennels or a cattery straight away.

One dog did find a new home today. Little Marla was adopted, after less than three weeks at the SPA. Quickly becoming a favourite with the volunteers, this little dog had so much character that it was not long before she caught someone’s eye. We wish her love and happiness in her new home.

There was also a reservation, but I will tell you about that when the day of departure arrives. All I will say is that it is a good one; a dog who has not had an easy life and whose luck is about to change. Great stuff! 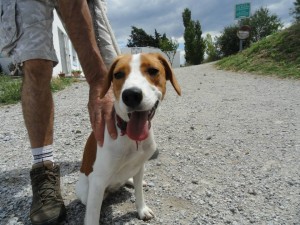