Adoption of Marley, Laya and Rex..

Two of tonight’s three adoptions are both recent arrivals and are both young, lovely looking dogs. The third is an older gent who has had quite a wait in kennels.

Laya had just more than the statutory pound time to wait and I am really not surprised. A young, friendly female of only two years old was always going to be popular.

Marley, a very handsome one year old attracted lots of interest on our social media sites and no wonder. Hes probably one of the most handsome dogs Ive seen, add to that his playful, friendly nature and its no surprise why he was adopted so quickly.

We love when dogs don’t have long to wait for their forever home and its always a bit of a mystery why some dogs attract little interest. Is it their behaviour in their kennel, their colour, whether they bark or not or why is it some dogs just don’t move?

If all of our dogs were great with other dogs, loved cats, adored children and were trained would our job be any easier? Well I think that training has a big effect on how a dog appears to potential adopters. If you ask them if they’d like to walk the dog that they are interested in and it pulls them so much they come back puffing and panting they most likely won’t adopt. Yet with only one walk a week it’s so difficult for us to teach lead manners. A recent article that I read said that if a dog lay down beside a potential adopter that they were much more likely to adopt it!

One dog who took a long time to catch anyone’s eye was 10 year old Rex who arrived in August last year. I really enjoyed walking this lovely boy as did lots of volunteers. Rex was adopted a few weeks ago but just couldn’t live with cats. Today was his lucky day and he has gone to a cat free home!

Last night I did make a little error in the blog reporting that the wrong Domino had been adopted. Below you will see a picture of the Domino who was actually adopted. 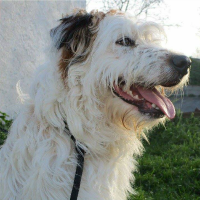 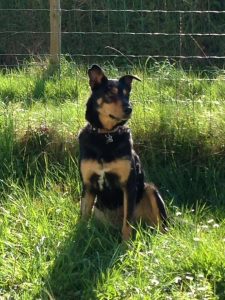 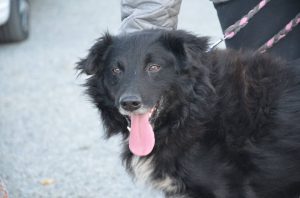 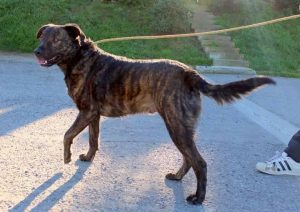