Adoption of Méline and Tina

Today was rainy and horrible and generally one of those days that is best avoided if possible. However life at the refuge continues regardless of the weather, and as long as adoptions happen, the mood remains positive.

Today two lucky dogs left for new lives. One of them, nine year old Tina, had only been there for a week, since being brought in for rehoming some 14 months after being adopted. Not all adoptions work out, but when it is not the dog’s fault, there is no reason why there shouldn’t be a quick turn round. Especially when a dog is small, female and absolutely adorable. Yes, everyone loved Tina when she arrived last year, and she has lost none of her charm in the intervening period.

Tina’s new mum is well known to the ScPA; as well as being a regular dog walker, she adopted Hera (also known as the Bullet Dog, for those of you with good memories) who is sadly no longer with us. Yes, Tina we knew that Tina would be readopted with no problem, but it is lovely that she has found such a wonderful home so quickly with such a devoted new mum. 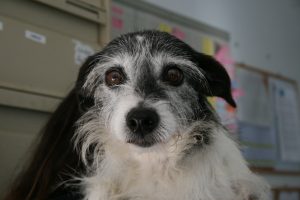 The second adoption was that of Méline. Now this girl has been at the refuge for almost a year, and funnily enough she was sharing with Fly who had also been waiting for a long time before being adopted recently. Sometimes this is the way it works; one dog in a kennel leaves and this enables the other dog to be seen more, or perhaps be seen in a different light. In any case, Méline is a lovely girl, who has come a long way since her arrival last December.

At the time she was a bag of bones and had obviously just had a litter of pups (not her first, I am betting). She was very nervous and refused to go too far from the refuge on walks, she just seemed to want the safety of her kennel, where there was regular food and cuddles. Staff and volunteers have done a great job with her, she is now a confident and (mostly) sociable girl, and everyone is delighted that she has a new home.

Many thanks to her new family and also to that of Tina. 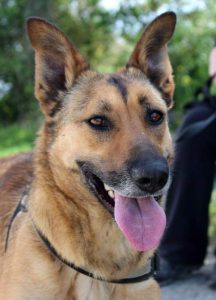 If we have two adoptions on such a miserable day, imagine how many we will have when the weather improves. If it ever does, that is! Stay warm and dry everyone, and spare a thought for the dogs at the ScPA who are hoping that they too will soon be in front of a log fire.

2019-11-07
Darcey Dyson
Previous: More Fundraising in Action
Next: Happy Huskies (or A dream comes true for Nilo and Oaka)