Tonight we are very happy to announce the adoption of Néron, a beautiful young Weimeraner. He has not been at the refuge for very long, but his rehoming is cause for celebration nonetheless.

Néron is one of the many dogs who is extremely lucky to have made it to the safety of the ScPA. He arrived identified, but his regisgtered owner did not come to collect him. It turns out that Néron had already been given away,  someone who already had a dog and did not really want another one. So poor Néron was tied up all the time and was constantly being attacked by the other dog.

He managed to escape this living hell, and when he was safe at the refuge we saw that he held no malice at all. He adores dogs of all shapes and sizes and adores humans even more, if that were possible. So it seems only right that he has gone to a new home with lots of other dogs. Néron is going to be dog number 9, believe it or not. But don’t worry about how he will be treated in his new home; we know the family well and several of their other dogs were also adopted from the ScPA. So Néron now has new friends;  Justin, Doudou, Lutine Mamie Gerthrude and Ozia (ex Chouquette) plus others to play with, and we look forward eagerly to see photos of the whole pack…preferably together, although anyone with multiple dogs knows this is no easy task!

Many thanks to his new family for offering a home to this lovely lad. 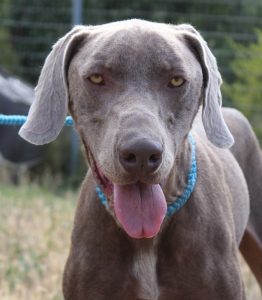 There was also a wonderful reservation, so more good news is on the way.