Adoption of Ninja and Angelo

Today, after a couple of days’ hiatus, we had two adoptions!

First to leave was Ninja. This wonderful malinois cross was brought to the refuge as a stray in April. Unlike many dogs of this breed, Ninja was relatively uncomplicated. He shared his box from virtually day one, and was very popular with staff and volunteers alike. He is a young dog, arriving at the age of some 18 months, and so he has his whole life in front of him.

However with nigh on 100 dogs at the refuge (yes, numbers are picking up now that summer is approaching), how to choose? Well, Ninja’s new family have reflected long and hard before adopting him. They have been along to the SPA on several occasions to walk him and to introduce him to all the family members including, today, their dog.

Ninja was good as gold, and tonight he is in his new home. Many thanks to his new owners and we look forward to news and photos in due course. 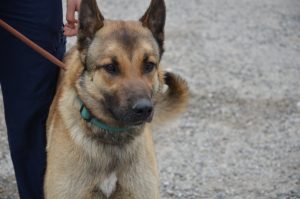 Today’s second adoption was that of puppy Angelo. Yes, there have been many puppy arrivals recently, and so we are delighted that at least one of them has found a home so soon. Angelo’s new family was looking for a young, active dog and to be honest, you can’t go wrong with a puppy, especially one that appears to have some Breton spaniel in the mix. 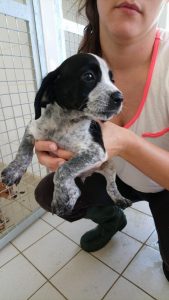 But who knows, perhaps looks can be deceptive…Yes, we have the results back of the DNA test that we carried out on puppy Spice! Watch this space, all will be revealed!

2018-06-27
Darcey Dyson
Previous: Jack gets another chance…
Next: Goldy is adopted and Huguette finds a foster.