Oscar’s time at the refuge has been typical in some ways and very atypical in others. He was seen straying in a terrible state and brought to the refuge thanks to the perseverance of a volunteer (in this his story is exactly identical to that of Melba, and several other dogs, mostly but not exclusively, hunting types). He was terrified on his arrival and the employees and volunteers did wonders in bringing him on.

He was adopted and brought back about three weeks later due to a “change in circumstance”. Grrr. And as he was absolutely terrified to be put back in a kennel, it would have been far better for him had the first adoption not taken place at all. This was in late September and it looked like Oscar could be in for a long wait.

However his luck changed when a woman came to visit him a couple of days ago and offered him a new home. She is not from the area, but had seen Oscar on line and paid him a visit while she had other business close by. Rather than her drive back, it was agreed that the ScPA (in the form of Carole) would take Oscar to his new home. As was the case with Arthos and Indian, this enabled a pre-adoption check to take place at the same time, which is very reassuring.

This afternoon the refuge has already received pictures of Oscar on the sofa, so it looks like he has got the hang of things pretty quickly. Anyone who might think that hunt dogs are made to live outdoors, think again! 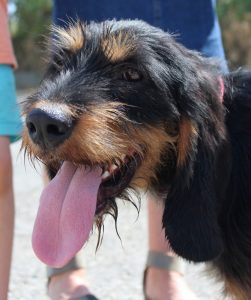 There have been lots of adoptions this week, but the good mood at the refuge has been tempered by the news that Canelle, the young malinois who was adopted on Monday, was killed on the railway line just 48 hours after leaving for a new home. Her new owner is very upset, as of course are the staff and volunteers. These things happen, as we know all too well. It is so tragic that Canelle’s wonderful new life was cut short.

We are hoping that good news tomorrow will raise morale again a bit.

2019-11-21
Darcey Dyson
Previous: And three more are off!
Next: Adoption of Kitana and Loupiotte