Today was a great day for Pomy; after nearly three months at the ScPA she left for a new home. She is yet another dog who was very lucky to have made it there. She and two other dogs were left alone in an apartment when their owner moved house, and had they not been rescued who knows what would have happened.

The puppy of the trio, Popy, was adopted soon after the three dogs were legally allowed to be rehomed, and some two weeks later it was the turn of Pomy. Despite the neglect they suffered before their arrival at the ScPA, all three dogs are beautiful and well socialised, and we hope that border collie Poma doesn’t have too long to wait either.

As for Pomy, however pretty she looks in this photo, she is far more beautiful in real life, and her new owners, who have walked her many times, are totally smitten. And who would have guessed that she would be so good with cats? Certainly not me!

We wish Pomy a wonderful new life and look forward to news and photos. 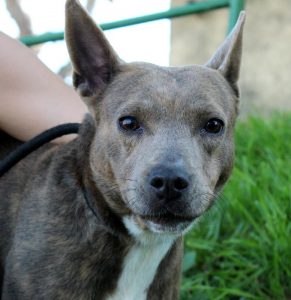 Also this afternoon a newly arrived (and already identified) dog was reclaimed, and further afield, we have news of the adoption of Chippeur from the SPA Montpelier and of Douce in Belgium. So it was a good Tuesday all round.

2019-04-09
Darcey Dyson
Previous: Catch up on two Sunday adoptions
Next: Adoption of Ambre 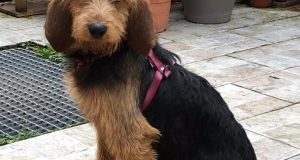