Adoption of Puppies Zig and Sharko

There has been a recent influx of puppies, as Facebook followers will probably have noticed. So it is wonderful that two of them, bull terrier crosses Zig and Sharko, were both adopted today. Not together, I hasten to add. Adopting two puppies from one litter often means double trouble. And probably more so when they are both strong characters, as is the case here. However the fact that both puppies left on the same day is very good news.

Zig and Sharko arrived some three weeks ago having been found unidentified at the age of three months. In the weeks since their arrival they have grown up a lot physically, but also emotionally. We all know that the first few months of a dog’s life are crucial in terms of socialisation, and since their arrival these two bull terriers have had lots of cuddles and affection from staff and volunteers.

However both dogs still have a lot of learning to do, and when it is clear that a dog will grow up to be powerful and strong, it is even more important than usual that their adoptive families are suitable. And it looks like Sharko and Zig have been very lucky in this respect. Each has been adopted by a dog-savvy family, and one even has a new pal to play with, who we hope will keep the new pup in line.

So we say farewell to Zig and Sharko and many thanks to their new families, and roll on next week, with hopefully plenty more adoptions. 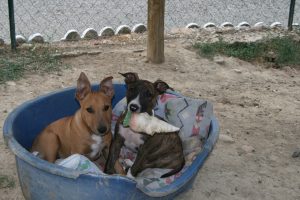 2019-08-25
Darcey Dyson
Previous: One and Two makes Three
Next: Adoption of Kyklos 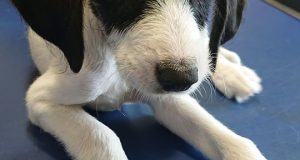