Home / Latest News / Adoption of Raina and an amazing reunion

Adoption of Raina and an amazing reunion

We had a lovely day at the refuge today. Plenty of volunteers were on hand to walk the dogs, and the weather is still wonderful, so the parks were all full.

We had a fabulous adoption, too, that of Raina. She is the mum of puppy Buddy, who was adopted a few weeks ago. I mentioned at the time that both dogs had arrived suffering from mange, meaning quite a lot of time in “solitary”. However since she has been well enough to mingle, Raina has become a great favourite.

A griffon vendeen on the slightly timid side, this girl needed a family with lots of love and patience, and preferably with another dog. And that is exactly what she has! Raina’s new family have experience with nervous dogs, and know that she is likely to spend most of her walks on the lead, but with plenty of cuddles at home, and an enclosed garden, we are sure she is going to be very happy. 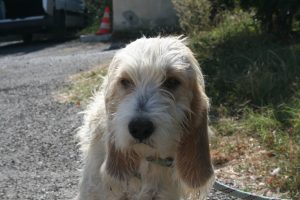 Then the big news of the day. No, not an adoption, but a dog who was reclaimed. We often have dogs reclaimed, so why is this so special? Well, mostly because this dog has been missing for EIGHT YEARS!

Jeep was brought in by a local association, as the dog’s owner no longer had time to look after him. And when he was checked for a microchip, it turned out he was identified, and not in the name of the man who abandoned him, either. Nor was his real name Jeep. How this had not been discovered during the previous eight years is a mystery.

Poupi’s REAL owner came to collect him today. She explained how, when Poupi was just five months old, a hole had been cut in their fence and their puppy was taken. The family had never given up, however, and were hoping that one day their dog would return to them. Of course had he not been identified it would have been impossible, so if you have an unidentified animal, perhaps this will help motivate you to have him chipped.

There were more than a few tears (yes, okay, I did blub a bit), and we hope that Poupi settles into his new (old home) easily. It is the same house, with the same people, so all should be well. 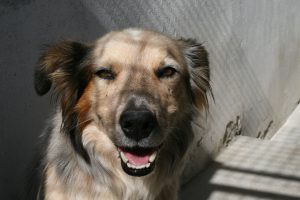 Poupi – REUNITED with his owners after 8 years

The ScPA is open tomorrow as usual! Let’s hope for more great news.