When a male/female pair of dogs arrives at the refuge, I think that 9 times out of 10 the female is adopted first. We have seen this over and over again, most recently perhaps with Sofi and Kris, but it has been the same many times in the past.

Today that trend was reversed, with the adoption of Roddy. When he and his “sister” Gabby were brought back to the refuge for rehoming in the middle of June, it looked as if Gabby might be the first to leave. Until she proved to be reactive to cats, that is. So today it is lucky Roddy who left for a new life. 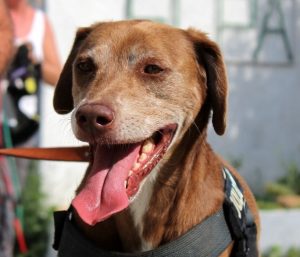 These dogs initially arrived at the refuge together and were lucky enough to be homed together the first time. However all good things come to an end, and it was extremely unlikely that they would be able to remain together once more. However we are sure that both dogs will adjust soon enough. Roddy has a new home with lots of new adventures ahead of him, and Gabby will soon have a new kennel mate, and hopefully a home of her own before too long. 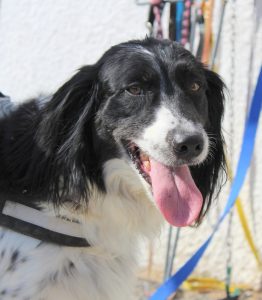 This is 6 year old Gabby, who is still waiting for a new home

Also tonight we have a new dog, who we are hoping will tug at someone’s heartstrings. Filou is a cocker spaniel who was born in 2006 and who has arrived at the refuge in very poor condition. He is a lovely old gentleman who keeps very much to himself. He is on the small side and is fine with other dogs and cats and really just needs a quiet home where he can rest his poor old bones. Just look at those eyes! Could you offer a home to this lad? 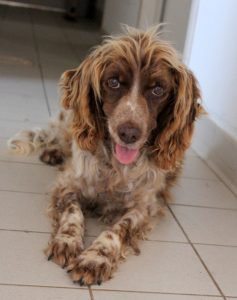 12 year old Filou is looking for a home