Adoption of Rose and Caillou

Yesterday saw the adoption of beautiful Rose. Well, some of us call her Rose, but her given name is Stinka. Not so sure about that one, in English, at least. This fabulous black shepherd arrived at the SPA last month, and as this was not her first visit to us, we had details of her owner (and her name). However this time he did not come to collect her, and many of us were pleased. Okay, it is not nice for any dog to spend time at the SPA, and Rose was not mistreated before arriving. However her owner’s lifestyle meant that she was probably destined to have lots of puppies, so her staying at the SPA long enough to sterilise (ie 10 days), was ideal.

It took a bit longer than that to find a home, but not too long in the overall scheme of things, and she has gone to live with a wonderful family whom we know thanks to their adoption of beauceron cross Silver several years ago.

And there was another adoption today. I (Darcey) finally cracked and adopted Caillou. He arrived in early July last year in a terrified state after being tied up and repeatedly beaten. When he finally emerged from his kennel he appeared to be very agressive with both people and other dogs, and so it was decided that taking him to dog school was the best solution.

We are lucky enough to have a partnership with the Club Canin Carcassonne, who permit us to take dogs for free training and socialisation, which is incredibly generous. Caillou is not the only dog to have benefited from this scheme, and we hope that other dogs will do so in future.

In any case, Caillou made quick and dramatic progress, and the bond between him and me became very strong. Jean-Pierre the trainer, kept telling me that I would end up adopting Caillou, but with three dogs at home, I insisted that this was not possible. However as the French say “C’etait plus fort que moi”. Tonight Caillou is in his forever home and I am over the moon! 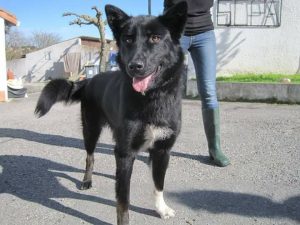 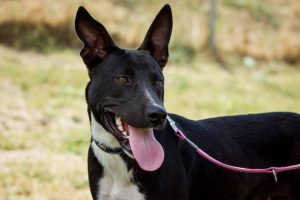