It has been a couple of days since we last had an adoption, but today that all changed, and so we will tell you about that, plus catch up on some other news that we have been itching to share.

First off, the adoption:

Fauve de Bretagne cross Rusty arrived at the ScPA as an unidentified stray in late February, and proved to be a wonderful lad, fine with other dogs and cats, and not at all nervous of people. He really is a gentle young lad, and we were all wondering when someone (other than employees and volunteers) would spot him.

On Tuesday a gentleman came to the ScPA to meet Rusty, whom he had seen on line. He loves dogs of all shapes and sizes, and had only recently lost a dog to old age. So Rusty already had a fan today when the man’s partner came along to meet him too. She is the one who will be spending more time with the dog, so it is only fair that she got a say in things, even though she, too, loves anything canine. Of course Rusty was as charming as ever, and has left for a home with plenty of walks and plenty of company. Many thanks to his new family and we hope he will be very happy. 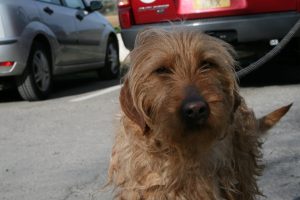 In other news, Nesquick has been adopted from the ScPA in Montpelier. Of all the dogs who left for there or Belgium, he was the one who had been waiting the longest; some two and a half years, in fact. So this is fabulous news.

Also on Thursday it was the first anniversary of the adoption of Pepper (ex Denver) so we thought you would like to see this before and after photo of him. What a difference a bit of hair can make! 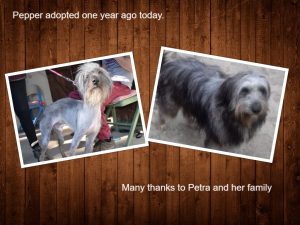