Home / Latest News / Adoption of the last two Ebony pups and another oldie finds a foster.

Adoption of the last two Ebony pups and another oldie finds a foster.

Today the last two pups from the Ebony litter were adopted! This is wonderful news; when the braque cross puppies became available for adoption I think a few of us were worried that the Ebony pups would be left behind, as they are bigger and of course are black. But in fact the whole litter of eight has been adopted in the space of a week or so, which is great news, especially as these really are fabulous pups, playful and well socialised and so deserving of wonderful homes. 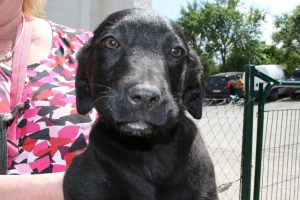 Houx and Iroko, to give their original names (although forgetfulness has caused them to be renamed on Facebook) have now left the refuge. Houx has gone to live with a lovely lady who has a young child plus a cat, and Iroko now has several cats for company. We hope that they will be very happy indeed and we look forward to news and photos. 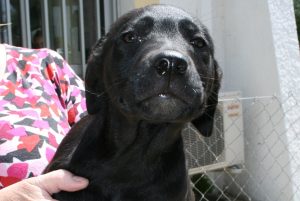 This is great news on which to end the week, although it would be better news still to hear that whoever let their dog give birth to these pups has since had her sterilised. We can but dream….

Another lucky oldie has gone to a foster home, too. Perhaps some of you will have seen the photos of a recently arrived dog, Busra. She arrived on Friday having been found straying. This little girl was in very bad condition, and was clearly very old. As she was identified the ScPA was able to contact her owners; last year, when the dog was 12 years old, they rehomed her privately. It is possible that her new family will collect her, but in the meantime, she has somewhere far nicer to spend her time.

Volunteers Ingrid and Marjorie have offered to take this elderly girl home to give her the love and care she needs.  Huge thanks to them. Busra has multiple tumours and deserves to spend her life in a loving environment, and so she has certainly fallen on her paws with Ingrid and Marjorie!

Our long term foster families are such a precious asset; it is no mean feat, offering end of life care to an oldie like this, particularly when a family already has multiple dogs. Ingrid and Marjorie’s other dogs all seem happy with their new house-guest, and the newly renamed Bianca has made herself at home already, as you can see from the picture below! 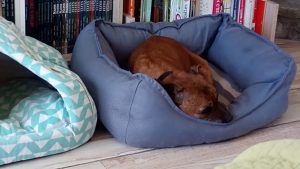 So another week draws to a close. What will the new one bring, I wonder?