I am really happy about today’s adoption, mainly because the dog in question, Tommy, looks like a clone of my boy, Caillou. So much so that when volunteer Shirley came in last week she initially thought I had brought him back! AS IF! But seriously, there is a pretty good chance that they share a mother, and just sad that whoever this dog is, she is still having unwanted puppies.

Tommy arrived in early August, and like Caillou seemed a bit wary of people. He got over his fears in double quick time, however, and was soon sharing his kennel too. He proved to be great on the lead, and today when a family came to meet him, he passed the cat test too. Hmm, perhaps he is not related to Caillou after all! Ha ha!

In any case, it is wonderful that Tommy has found a home so quickly. And what a home! Tommy’s new owner is a young woman who has a French bulldog, but who wanted another more sporty dog to accompany her on her horse-riding expeditions. We are sure he will have a whale of a time.

The adoption of Tommy is also quite apt as today is international black dog day. Okay, Tommy isn’t all black, but mostly! This is a day when shelters the world over promote black dogs, as they are the ones who have the least chance of being adopted. Incredible thought it may seem, even in the 21st century, superstitions still abound that black dogs (and cats, of course) are harbingers of ill fortune. Crazy, isn’t it?

Tommy’s new family will be busy discovering how much joy a dog, “even” a black one, can bring to their lives. Many thanks to them, and we look forward to news and pictures. 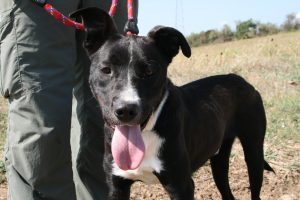