Home / Latest News / Adoption of Tonino and a bit about Puppies

Adoption of Tonino and a bit about Puppies

The week started with the adoption of puppy Tonino. Many thanks to his new family. Tonino is one of  some 16 puppies who have arrived at the SPA over the past few weeks. Several of them are reserved and a couple of the lucky ones are already with their permanent families. This is because when they arrived they were too young to be vaccinated and obviously a family home is a far better place to spend these crucial early days and weeks than a refuge.

The first litter (of eight) who arrived were left at the SPA gates, so someone presumably still has the mother, who is presumably never going to be sterilised and who presumably will have a puppies every six months who will presumably be handed into the SPA each time. Or perhaps the mum’s owner is one of those ill-informed people who still believe that a female dog should have one litter before being sterilised. All the veterinary evidence says the opposite, but some people prefer their own version of reality, sadly. Luckily the SPA is there, and luckily there will always be people wishing to adopt puppies. 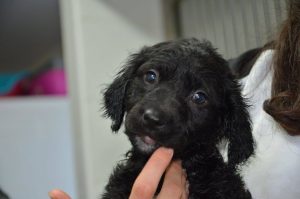 For anyone looking for a puppy, now is a great time, as there are lots available. Unwanted puppies are the sign of irresponsible ownership, but it doesn’t stop them from being very, very cute!

As ever, please do not adopt a pup as a Christmas present for someone else, or even for yourself unless you are planning on having a dog anyway and are just using Christmas as an excuse. And make sure you read about the responsibilities of dog ownership and are under no illusion about how much hard work (as well as fun) having a new puppy will be!

However if you are sure, then why not find your little bundle of joy at the SPA? Look at how adorable the puppies are! 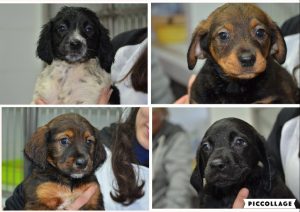 Some of the puppies at the SPA