Today saw the adoption of Triffon, a fabulous griffon nivernais who has been at the refuge since the end of September. He really is a fabulous looking lad (a terrific griffon, in fact) who according to the vet’s estimate is about four and a half years old. We have no idea where he had spent his time before being brought to the ScPA as an unidentified stray, but he now has a home of his own, and better still, he has a new canine pal.

Dogs are generally social creatures and if the ScPA employees are able to mix them, they usually make far quicker progress, as well as having much happier lives. Triffon was just starting to enjoy his play time in the park with other dogs, so having another dog in the family will be a big help for him as he settles into his new life. 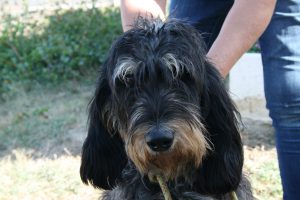 Please don’t forget that the refuge is open tomorrow afternoon, and like today, the forecast is due to be great, so why not come along and meet some of our wonderful dogs!