When Wolfie arrived last week everyone guessed that he would not have very long to wait. However few of us could have known that he would not even make it as far as the refuge, instead he was adopted immediately from the pound, ie after the minimum amount of time at the ScPA. How wonderful.

Wolfie was found as a stray, but he must have had a home before becoming lost. He was neither thin nor nervous, he loves people and does not pull on a lead. At under a year old, this dog seemed to have just about every quality that people look for in a dog.Why was he not identified? And why was no one looking for him? We will never know.

Luckily for him a family came to the refuge looking for a new pal. In fact they had come specifically for Texas, whom they had seen online. However he had been rehomed, so they did a tour of the refuge and their eyes fell on Wolfie. There followed a nervous wait, in case his owners showed up, but today Wolfie was officially up for adoption, and he left as soon as he returned from the vet.

His new family have six children and are very sporty. Wolfie, now renamed Marley, will never be alone and we are sure that a wonderful life awaits him.

As the weather was a bit cooler there were lots of walks, so thanks to everyone who came along to brighten up the lives of the dogs. 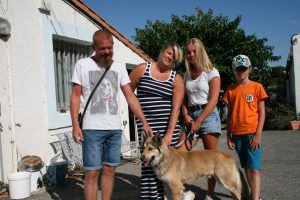