Adoptions of Fly and Gus.

We promised you good news, and today we have two adoptions to tell you about.

First fabulous Fly left for his new home. This lovely pitch black braque cross arrived just short of four weeks ago having been found in a local village. He was not identified, and when Fly visited the vet we found out he was just 7 months old. Could this be yet another puppy who was given away for free on the internet and who just outgrew what his family was expecting?

Luckily Fly caught the eye of a braque-lover. She had two female braques and although Fly was not at all what she was looking for (she wanted a female of a non-hunt type!), when she saw his photos, her heart just melted. Earlier this week she came to see how the three dogs got on, and today she came in to take lucky Fly home.

She has promised photos of the three dogs together, and we look forward to that, because they did look truly magnificent. And surprisingly similar, in form if not in colour. 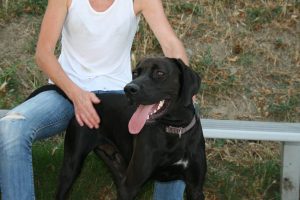 Next we said goodbye to Gus. This breton spaniel was abandoned in May by his elderly owner who was no longer able to exercise his active dog. His family are great animal lovers, with quite a menagerie at home. In fact they came in with another dog in mind, but thanks to the questionnaire, the employees, who know the dogs best, were able to suggest a dog who was the same breed as the one they wanted, but whose character was better suited to their lifestyle. They were happy to take the ScPA’s advice, and we are sure that everyone will be very happy. Gus and his new pal Bilou both had big smiles on their faces as they left, in any case. 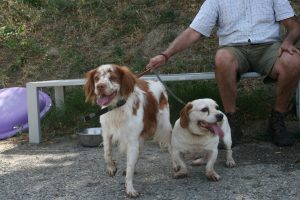 We have more leavers tomorrow, so the week is certainly finishing better than it started.