Adoptions of Goliath and Fossette

Two more adoptions today to keep things ticking over and moral on a high.

First to leave was Goliath.

We have noticed on a couple of previous occasions that for some dogs, adopters are like buses. You wait for ages and then they all come at once. Such was the case for Goliath. This dogue Argentin cross has been at the ScPA since August 2018, when he was brought in with his son, Samson, both in very poor condition. After a couple of initial enquiries  that came to nothing, it all went quiet. Then last week THREE families wanted him! Of course only one family could adopt him, but things actually sorted themselves okay due to compatibility issues with other dogs.

Goliath’s new family has no other dogs, but they have children who are completely gaga about Goliath, and he seems to feel the same. It has been a long wait for this lad, who is now over seven years old. But he will soon forget his time at the ScPA and whatever went before it, too. 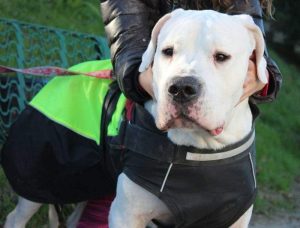 Next we said farewell to Fossette, a tiny puppy who arrived earlier this month. We are not sure what breed she is; perhaps a fox terrier, perhaps a fauve de Bretagne, but one thing is clear, this girl is very lively! And that is great, as that is just what Kate and her husband were looking for. They came post haste to the refuge to reserve her, pending the end of her pound time.

So today Fossette is in her new home, where she will never have to spend any time alone. Kate plans to take her everywhere with her, which is perhaps as well, as Fossette has already become quite an expert at opening doors! Plenty of fun is expected! 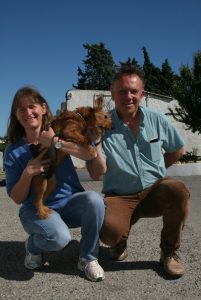 As well as that there were plenty of walkers plus several people with plans to adopt, so it was a good day. And don’t forget the ScPA is open tomorrow afternoon for those of you who would like to take a tour!

2019-04-30
Darcey Dyson
Previous: Three Adoptions and Bezingha Flies to Freedom
Next: Adoption of Cortex and Polochon