Adoptions of Kyra and Milo

Two dogs were adopted today, and they have something very important in common. Both Kyra and Milo were brought in by their owners for rehoming.

This means that the ScPA already has plenty of information about the dogs, their likes, their dislikes and their actual age (rather than a vet’s estimate). It also means that the ScPA does not have to keep the dogs in the pound for 10 days whilst looking for the owners. The dogs can move to the refuge proper immediately (which usually means canine company and walks!) plus the dogs can be adopted without delay. And in fact both of today’s leavers found new homes before spending 10 days at the refuge! QED.

First off was Kyra. She is a very sweet English bull terrier who arrived less than a week ago with a great CV; good with dogs, cats and children! She caught the eye of the family who had adopted Price earlier this year, and everyone was delighted when the two dogs hit it off well. We get regular news of Price who is clearly a very happy boy, but who will be even happier to have a fabulous friend to play with. 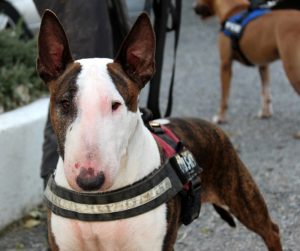 Next the ScPA said farewell to Milo, a classic looking border collie. He caused quite a stir when his photos were put on line; he is a stunning boy with many typically border collie traits, most significantly his quickness to learn and attachment to his owner. Border collies are very intelligent animals and often find refuge life very difficult, so we are pleased that Milo has found a new home so quickly. 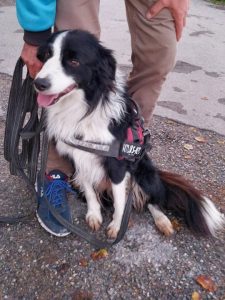 So that was Sunday and brings to end another week, one which had plenty of adoptions. Let’s see what next week has to offer.