Adoptions of Sally, Rockett and Jaffa

This has not been the best week at the ScPA. Apart from the death of poor Pato, who had spent three years waiting for a new home that never came, we had four dogs brought in for rehoming in just one day (yesterday). And that is not including the other dogs who were found as strays and brought into the Pound. So everyone was in need of some good news.

On Thursday a couple came along to adopt a second dog as a companion to their poodle/ lab cross, Zero. Caroline and Andrew were initially interested in one of the recently arrived staffies, and were willing to jump through all the administrative hoops that this would involve. However while doing a tour of the refuge,  their eye fell upon lab cross Sally. She is one of Mattie’s pups and is one of the 7 dogs left behind when their owner moved house last summer. So far Mattie is the only one to be rehomed (she was less traumatised than the others and is doing wonderfully with our friend Angie), but the puppies (who are now 18 months old) are making enormous progress at the refuge, thanks to the staff and volunteers.

Progress will be far quicker away from the ScPA, however, especially with another steady dog as guide. So it was fabulous that Caroline and Andrew have decided to offer a home to Sally. They know there is work to be done, but are well prepared and of course we will be there to offer help and advice should they need it. 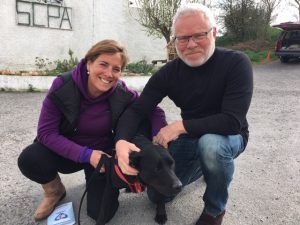 Second to leave was Rockett. Now this dog has only recently arrived and it was immediately clear that he would have no trouble finding a home. But of course it had to be a good home, not just someone who was attracted by his stunning looks. Because this is one handsome boy. Not quite two years old, Rockett is fine with other dogs, children, cats, and is only at the refuge because his family moved to Canada and were “unable” to take him.

A family came along to meet him this week, and today, after a quick visit to the vet for a quick “snip”, it was lift off for Rockett. He has a great life ahead of  him, with a sporty family who will take him everywhere with them and who love him already. 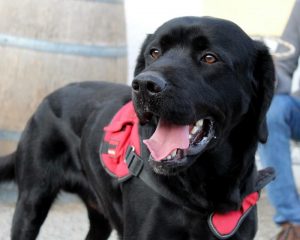 There was another adoption today, also of a dog who was brought in for rehoming. They said that he was wonderful; affectionate and well behaved. But sometimes dogs of this shepherd mix have trouble getting noticed; there are usually quite a few of them at the refuge at any one time. Many of them are like Jaffa, calm, steady and real hidden gems, so it is worth finding out more, as did today’s visitor.

We hope that Jaffa’s new home is every bit as wonderful as he deserves. His former owners gave him up in preference for a pair of pedigree dogs, so we hope they are even more wonderful than Jaffa, or we don’t reckon much to their chances of staying put! 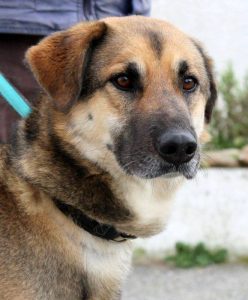 So not bad for a Saturday and a much needed morale boost after a “complicated” week. There may be more good news on the way tomorrow, you never know.