Adoptions of Soda and Pablo

After a couple of quiet days, today two lucky dogs left for their new homes. Both of them are relatively new arrivals, and although it is particularly wonderful when long termers are adopted, it is also fabulous when young, well socialised dogs do not have to spend too long behind bars before finding happiness.

Soda is a smallish black shepherd cross who arrived about three weeks ago having been found tied to the refuge gates. Not only is this unnecessary (there are kennels there which keep dogs safe and secure), it could also have been fatal. This is because the sliding gates are operated by remote control and had Soda not been spotted before the gates were operated, she could have been dragged into the mechanism. There is a sign specifically telling people to not tie dogs to the gates, but perhaps people who tie dogs to refuge gates don’t worry about what happens afterwards.

In any case, Soda proved to be a delightful little girl, happy and energetic and fine with other dogs. It is fabulous that she has found a home so quickly.

There are a couple of other black (or mostly black) females of the same type at the refuge, so if you missed out on Soda, take a look at the photos or get in touch. 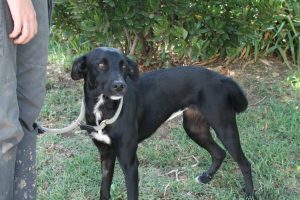 Second to leave was Pablo. He arrived at about the same time as Soda, and he too has been lucky to find a home so soon. But when Moira and I met him on Tuesday, we somehow knew he wouldn’t be waiting long. Pablo has incredible body language, wiggling his whole body with pleasure when anyone approached his kennel.

He was spotted by a family who have been back a couple of times to introduce everyone and to make sure of their choice, and today was the day. Pablo has wiggled off to a new home, and we look forward to news of him, just as we do of Soda. 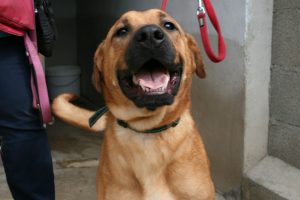 The weekend starts here, and we already know of one adoption that is due to take place. It is of a little girl who has been busy bringing up her babies, but who is now going to a home of her own. Can you guess who it is?

For followers of DRC, we can a