And the bubble bursts!

Usually the departure of three dogs would be cause for celebration. And of course we are delighted for today’s lucky adoptees. But bearing in mind that six new dogs arrived, the champagne corks will have to stay in for now.

Two of today’s adoptions were the start of what I am calling the Anatolian Exodus. Yes, two of the Anatolian shepherds, who arrived in such appalling condition in early October left the SPA today. One of them, Gargantua, is going all the way to Haute Savoie, his new owner having made a 12 hour round trip to collect him. Another, Giga (now Ruby) is staying closer to home, but with a family who already knows the breed well and are also known to the SPA. In fact years ago, when I was a new volunteer, they adopted a dog called Rocky (now Roxy) and it was wonderful to hear news of him  and his adventures.
The third departure was that of another puppy, one of the Egyptian Deities, Apis. He leaves five of his siblings behind. So if you like the look of him, don’t despair, there are plenty more waiting for homes.

In terms of new arrivals, one of them was identified and reclaimed immediately. Four of the others have albums on Facebook, but the fifth, a puppy, is in such a terrible state (yes, at 8 weeks) that he may not survive.

The two littlies, a York and a teeny tiny cross breed may be reclaimed, or at least being small, should be adopted soon. One of the others, lovely Diesel who was found in Esparaza, will probably have a long wait and as for Djamon, he is a beautiful beauceron whose owner phoned us up to book a slot to abandon his dog then decided to throw the dog out instead. There is a reason we ask people to wait their turn. It is so we can insure that there is a space available. How many times do we have to say “The refuge is full” before people stop treating us like a dustbin for their unwanted dogs and cats?

Today’s departures did not free a single box, as all three puppies were sharing their boxes with their siblings. The big new arrivals take up far more space. Oh, for a world where people sterilise their dogs and love them forever!

Everything was going so well this week; my bubble has burst.

Gargantua leaves for the Haute Savoie 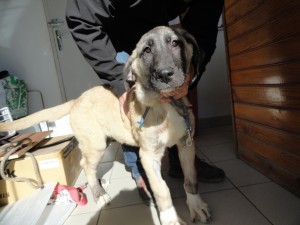 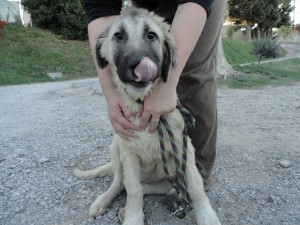 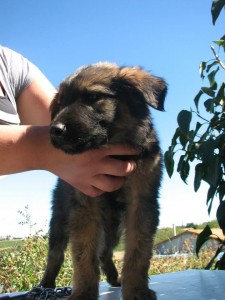 But Djamon arrives, two weeks early, but his owner didn’t care enough to bring him in as arranged 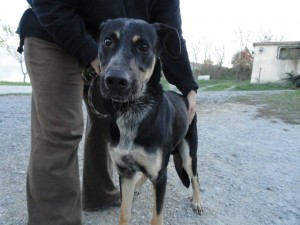 Chiffon’s prospects are much better, he is small and young 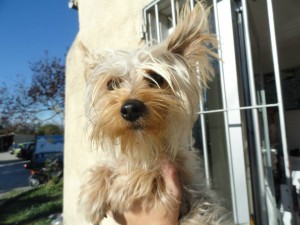