Home / Latest News / And three more are off!

And three more are off!

Three more dogs left the refuge today, so the week has been an excellent one so far, despite a couple of disappointments, and inevitably several new arrivals.

First of today’s lucky leavers is Gucci. He is the third of three dogs (the others being  the already adopted Angie and Chanel) who arrived after a case of neglect. There is a difference between neglect and mistreatment, though, and Gucci, like his “sisters” was not particularly nervous of people, at least not once he was out of his kennel and on a walk. It was thus that he found his new mum, Jayne, who came along just for a look, but who happened upon the dog of her dreams straight away. Clever boy, Gucci, and we hope you and Jayne have many years of happiness ahead of you. 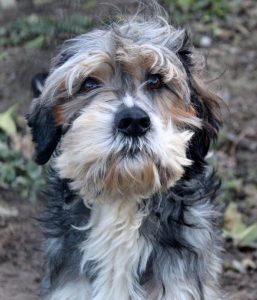 Second to leave was Pretoria a young black and grey Breton spaniel. We get quite a lot of dogs of this breed at the refuge, with the black and grey ones being a bit less common. A tiny one like Pretoria was never going to have a long wait. You might have guessed that she arrived on the day of the rugby world cup final, so not long ago at all. She is a real live wire and her family will adore having this ball of energy to play with! 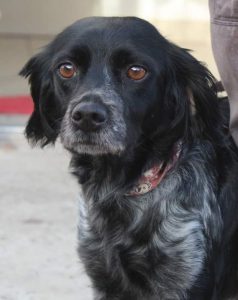 Last but not least we said a happy farewell to Impala. For the second time, as it happens. Except last time she was called Pirouette, the puppy who arrived with her mum Noisette (who is still waiting) in September 2018. Pirouette was adopted fairly soon after her arrival and was brought back a year later as she had been chasing deer.

Now I am not saying my dogs are perfect, but if them chasing deer were a problem, then I would stop them being able to chase deer. I would not bring them back to a refuge. And the renamed Impala is hardly a hunt type breed, so there were clearly management issues. However, as we often say, there is no point forcing people to keep a dog who is not wanted, whatever the reason. Impala could do better.

And today she has done better, finding a new home some six weeks after being brought back. She is a wonderful girl with amazing body language, and has been really popular during her time with us. 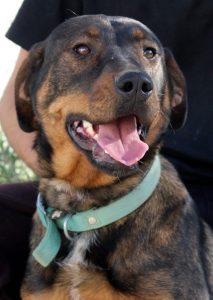 Let’s see what the rest of the week brings, but it hasn’t been too bad so far!