Home / Latest News / Anita and Mick raise funds thanks to curry and cake!

Anita and Mick raise funds thanks to curry and cake!

On September 1st, Moira wrote about the Vide Greniers that took place that day and the work put in by our super volunteers to raise money for the refuge. Well, last night I went to a very different kind of fundraiser.

This was a curry night organised by Anita, who is a professional caterer (see her website http://www.lesdelicesdanita.com/ and her Facebook page www.facebook.com/pages/Les-Délices-dAnita/184120071703543), who lives in Rennes les Bains. There were some 30 people there, a mix of French and British, all tucking in to a traditional Indian meal! We had poppadoms to start, then onion bahjis and samosas, followed by 4 different curries with rice and nan bread. Dessert followed, and I was treated to a magnificent birthday cake, (Anita is often called “The Cake Lady” and now I know why!)

The evening raised €350, which is a magnificent sum and will be greatly appreciated by the animals at the refuge. Thanks so much Anita and Mick. I had a fabulous time, and it was lovely to see Castro, formerly Ray, the blind Bleu de Gascogne, who popped in to say hi, and also to chat to the owners of Millie (formerly Charolotte) who had been adopted from us in March.

The refuge was fairly calm today, apart from the arrival of a 9 year old Brittany spaniel, whom we have named Apache. He is really adorable, with freckles on his nose. I have a feeling he is going to be one of my favourites! Oh, and we had three new volunteers join our happy crew of dog walkers, so lots more dogs will get out for exercise and socialisation. Thanks girls!

No fewer than four dogs are packing their suitcases before leaving tomorrow, so don’t forget to see who the lucky ones are!

Happy Birthday to me! 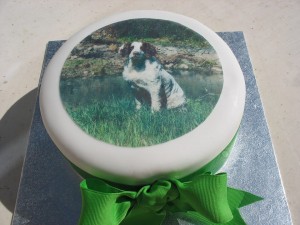 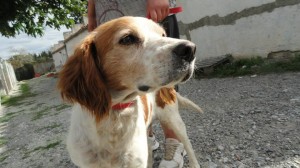