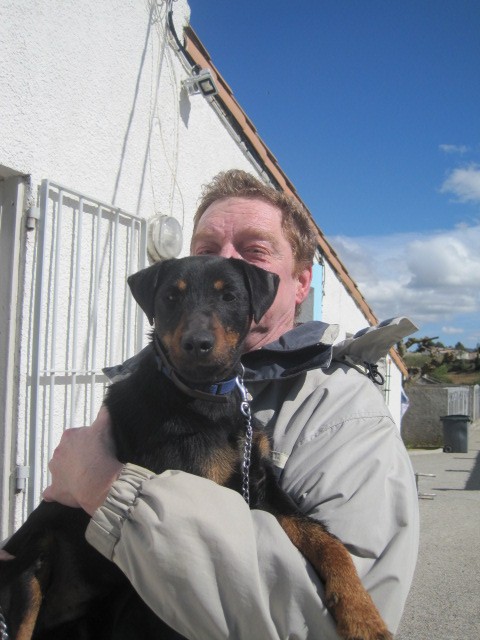 Following yesterday’s adoption of Gordon, the rottweiler, we were not expecting good news so soon. Compared to last Tuesday, with its seven arrivals, today was a breeze.

There were just two arrivals, one a beautiful female golden labrador who is identified and should leave tomorrow (so no photos of her for now) and the other a tiny puppy, who has been called Limbo. He may well turn out to be a harlequin beauceron, and although we would like him to be in a foster home (and we did have offers to take him), we are not quite sure if he has a touch of mange on his ears. Not worth the risk of infecting a foster family’s animals, so Limbo is stuck with us for a while.

Panais arrived at the end of December 2014 and immediately let it be known that he was not happy at the SPA. He rubbed his ears on the side of his cage, resulting in his needing a bandage round his head (a bit like when people have mumps in cartoons). And he was not the most sociable of dogs. Lucky for him, though, he had a sponsor mum, who has been to walk him several times a week. Thanks to her, Panais has had lots of exercise and affection, despite his rather strong character.

But his sponsor was unable to adopt him, as she already has two dogs, and Panais does not like other animals. In fact he is not all that fond of most people. However today, out of the blue, and despite numerous “shares” on the internet, it was just a random visitor who fell for this little chap.

So today to resounding cheers, we bid farewell to Panais. Watching him in his new dad’s arms licking his face was amazing.

Oh, one final word, despite the fact that this is DOG Rescue Carcassonne, we like to help out the cat side of things when we can. The SPA is desperately short of cat transport boxes, if anyone has any lounging around unneeded. Ones with metal doors preferably. Many thanks in advance! 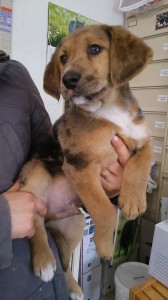 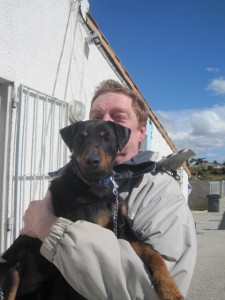 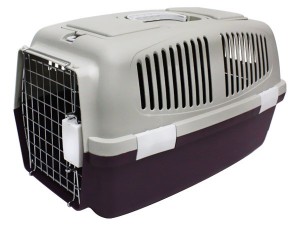