Home / Latest News / Another puppy day – but in the right direction!

Another puppy day – but in the right direction!

It was too hot to walk the dogs today at the SPA, so it was a good chance to catch up on some photos.

Those of you who follow the Facebook page will have seen that we had a magnificent new arrival yesterday. A three year old Newfoundland called Galahad. He is identified, but his owners are not responding to their phone. Perhaps the internet will help them be reunited.

Today we had three adoptions. First to leave (though last to arrive home) was Valyne, a young cross breed who was spotted on the internet and who has now gone up to live in Chatearoux. There is no reason to change a winning team, so once again the transport was done by a human chain consisting of Marie-Pierre and her husband who did Carcassonne to Toulouse and then David, who has a twice weekly lorry run to the middle of France and who quite often takes a SPA dog on his passenger seat! Thanks so much to you all.

Meanwhile back at the refuge two more puppies were adopted in addition to Guimauve and Maya, who left yesterday. Both Loukoum and Mayo left today. Still plenty left, though, including beautiful Jeena. Visitors perhaps don’t realise she is for adoption when they visit the refuge, as she stays in the reception with foster mum Carole. She has become quite a gem, though, good with children, cats and other dogs. Likewise little Scampi, who is in foster with Martine. He too is good with cats, and unlike Jeena will be dog sized when adult, rather than pony sized! Please get in touch if you would like more details on either of them!

Today saw the sad return of Belote, renamed Betty. She was adopted over two years ago and her family have waged constant war to integrate her with their other female. They have finally given up, after heroic efforts. Many tears were shed, believe me. Betty is extremely jealous of female dogs, although she is fine with males. She is also great with humans of all ages and is okay with females whom she meets on walks. However she will not let another female near her owners inside the house. If you like Brittany spaniels and have no females, then this girl is just magic. She sticks to you like glue, is fine off the leash and just wants love. ALL your love. If your male dog is happy to share, then she would be a great second dog, but otherwise she should be the sole dog of the family.

Two further arrivals are now immortalised on camera. A little old beagle who is identified but whose owners are not answering their phone, and a tiny male yorkie, not identified, and in a very bad condition, although he seems quite young. More information on them in due course.

Valyne on the front seat of David’s truck! 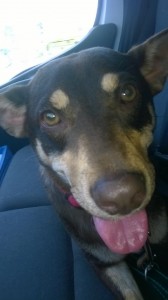 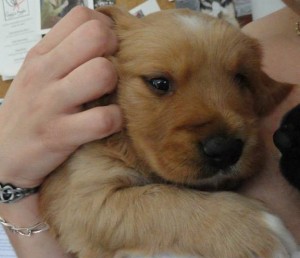 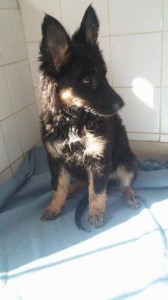 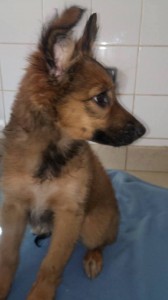 Betty –  back at the refuge and looking for a home without another female. 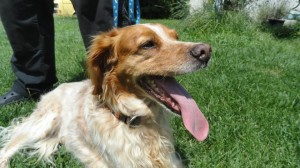