Arrival of new puppy and Eeyore offers to help!

Today saw the arrival of a little puppy, about six weeks old and hence very much in need of a foster family. Many of you know that we like to use foster families for elderly dogs (like Voice, who arrived injured and at the age of ten), but we also like to protect our young pups from refuge life. Partly because they are more susceptible to diseases and so are at risk before they have their vaccinations, but also because when they arrive at a young age, they are often in need of “canine guidance” in order that they can develop into mentally stable and well-adjusted adult dogs.

Many are the tales of dogs who have been taken from their mothers at too early an age (sometimes as young as 2 weeks) and whereas this CAN work, it is usually the case that after about a year, psychological and emotional problems become apparent. Dogs need to be with their mums for a minimum amount of time both for nutritional reasons (nothing beats mother’s milk!) but also in order to learn doggy manners.  Unscupulous breeders are often to blame for this state of affairs, but also people who can’t be bothered to have their bitches spayed, and then just leave the pups to fend for themselves or give them away free on the internet (which is ILLEGAL unless they are idientified).

Sadly foster families are few and far between. We used to have several people upon whom we could call in our hour of need, but for various reasons they are no longer available. One common reason is that people fall in love with the dog they are fostering, and all of a sudden their home is full. This is what happened to me, and with four dogs of my own and a fifth as a temporary guest (two months and counting), I just can’t help out. Other volunteers just move on, or don’t have time to take a pup.

Carole has Jexie at her house (the puppy who arrived earlier this week) so when the new girl arrived, there was no option but to post an urgent appeal on Facebook, where we have a group for foster families. Luckily Lisa saw the appeal and immediately came forward. Another volunteer took the little one to the vet for her first visit, then drove her closer to where Lisa and Andrew live. Teamwork!!

Lisa and Andrew have four other dogs, so the new arrival, a little spaniel as yet to be named, will get plenty of doggy companionship. Thanks so much to everyone involved in giving this little girl the best possible start. Bearing in mind she has been lost or abandoned at such a young age, things can only get better!

Just another day at the refuge!

Regarding yesterday’s appeal for compost and plants, we are delighted to be taking delivery of some 10 month old donkey poo, which will be excellent. Many thanks to the adopters of Newfoundland, Grizzli (renamed Oki). Don’t worry, after this amount of time it does not smell! The idea is to make the SPA more attractive to visitors, not less 😉 !As for plants, we hope to fill flower beds but also large flower pots, so anything at all is welcome.

New arrival- Lisa and Andrew will decide on her name!

Relatives of Eeyore help the SPA. 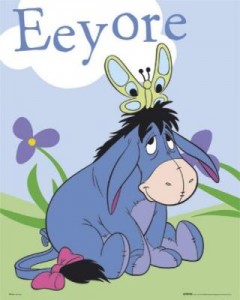 2014-04-25
Darcey Dyson
Previous: Abby visits and slave labour is alive and well!
Next: Victory for the SPA means freedom for Kitty!