Home / Life After The Refuge / Arthur..

The joy of our life, Arthur was adopted by us in October 2016 from the SPA in Carcassonne. We wanted a dog since moving to France and we trawled the internet looking at various dog sites to find the perfect match. We went through the idea of buying a puppy and decided we wanted an older dog and therefore, why not a rescue dog? It just made a lot of sense to have a rescue dog. My husband who should have been a vet, couldn’t stand the thought of all those rescues out there without homes. The sadder the situation the more his heart opened. We nearly settled on a poor 9 year old dog who had had a rotten life, but she was taken before we got our act together.

This time wasn’t wasted, as we were able to be acquainted with the various problems that rescues can come with, and also we started to mentally collect our shortlist together. Meanwhile we were chatting to Moira at the SPA at Carcassonne but we couldn’t settle on the ideal dog. I remember this time of going on to their website and learning off by heart the details of each dog as we were on there every day. We also sorted out what was important to us, we are able to take our dog for walks everyday, had a large garden, but didn’t want to be out there for hours. Finally, we took the plunge and drove down to Carcassonne to see the dogs upfront. We kade a pact that if there wasn’t a dog that appealed we would drve back empty handed rather than taking a second best.

We live in Brittany and the SPA was a good 8 hour drive away. We bought doggie things some sensible, others less so! Then we were off to see the SPA. I was first taken aback by all the barking when we arrived at their compound. Barking to me is a no-no with my dogs so a bit hard to adjust. I have since learned that compound dogs do this to attract your attention, so be warned! We met Moira and she suggested that we walked round all the cages before making up our minds. By the time we finished our rounds my husband was convinced to take them all back with us! We were toying with the idea of two dogs, and fortunately Moira talked us out of it, and she was right, the settling in period is very important for a successful adoption.

A scruffy looking dog in a cage on his own took my eye, and while Moira and my husband were discussing doggie things, I walked over to see this large ball of scruffiness. He didn’t bark like the others as he was a new dog, just in last week. We fell in love with him straight away and knew that he was the dog for us. Moira suggested a walk with him, and joy oh joy he never pulled on the lead, not once!

He came home on the freedom van, they delivered right to our doorstep. And at 7 years of age, Arthur started his new life with us. It took him about 3 months to settle in. He never barked, and never pulled on his lead. We learnt that he had an amazing habit of doing his toilet on top of things, like a rock or shrub or even tall grass. Once in a motorway services area he managed to put an artistic gathering of poo on top of one of the large kerbside stones! I scooped it up immediately, hoping to goodness, that no one saw us. But he could have got 9 out of 10 for artistic merit!!!

Arthur slept in his own bed in our bedroom and there was never a toilet mishap. As he grew more confident he started to pull on his lead, so much so that I couldn’t manage him. I was conned by an expert! We devised a Halti with harness system and he is unable to pull, only to stop and try to pull off the Halti. He still hasn’t accepted it, but puts up with it on our daily walks through the countryside.

Everywhere we go everyone wants to stop and pat him. Particularly in England. His breed is the oldest in France, especially bred for hunting, a Griffon Nivernais. Unfortunately, their hunting trait is so good that even now if Arthur picks up a scent he wants to be off. This is a downfall for recall though! Sadly, we cannot let him off the lead outside of our garden. He does eventually come back but it may be hours.

One unusual habit that he formed in the back of our estate car is to lick the side windows, going from side to side to lick them with a high pitch squealing sound! We haven’t resolved that one yet but giving him less room slows him down a bit. When we got our other rescue dog, he learnt that he can bark at other dogs! So he can be a quick learner if he wants to. We drive up to the UK frequently and he is a good sailor as well as learning that motorway driving is sleeping time.

One cat of ours likes to snuggle up to him in the evenings when we are settled on the sofa, Arthur doesn’t mind at all, but when the purring drives him mad, he leaps off and makes himself comfortable somewhere else. The same cat though plays ‘Chasey’ through the house with him, they take turns chasing each other. It is hilarious to watch a 25 kg dog being chased by a 5 kg cat!

Our lives have changed since we got Arthur, we have a furry animal that loves to be with us and curl up beside us when he wants some company. He is our watchdog when it comes to strangers, dogs and the occasional attack by a local cat he warns us with his loud, deep bark. He is great with children, friendly with other dogs and our family and friends. What more could a dog owner want?

The choice of having a second dog was confirmed quickly as he made friends and became best buddy with our other rescue dog straight away. There are times unfortunately that we can’t take him on our travels, so having a ‘sister’ is good company when they are put into boarding kennels. As you can see, she has taught him some naughty tricks but that is to be expected. We went back to the SPA Carcassonne to find our second dog, but there were none suitable at that point. However, Moira came up trumps hearing of a dog on her doggy grapevine. All has worked out well since. And when the sad time comes when he passes on to doggy heaven, we will be in contact with the SPA Carcassonne again to have another rescue dog. 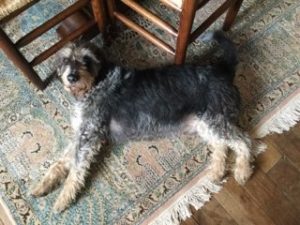