Home / Latest News / Atlas travels to his new home, Speedy is adopted too!

Atlas travels to his new home, Speedy is adopted too!

Today was a very happy day for two dogs. First there was Atlas, a dog that I just love, and in fact Moira and Karen love him so much that they fight for the right to take him on walks!

Atlas arrived at the refuge for the first time in 2011, when he was found tied to a tree in the middle of nowhere, presumably expected to die. Luckily for him, his frantic barking attracted someone’s attention and he came to the SPA, where he spent several months before being adopted. Although he was young he suffered from black dog syndrome, by which I mean that a non-black dog as beautiful and well-behaved would probably have been adopted quicker.

All went well until Atlas was brought back to the SPA by his family who said he had become difficult. He didn’t seem particularly difficult to us, just a bit bigger. That was in November 2013 and Atlas has been waiting ever since. As I say, he has been very popular with the volunteers, and of late also with his female kennel mate, Pocahontas.

Today he left for his new home, thanks to Doglinks, our sister site. He left via a hastily but efficiently arranged co-voiturage to Limoges. Thanks to Dominique and Melanie for arranging this, and to the drivers, Marie-Pierre and David, each of whom did a stretch of the journey. I await news of Atlas’s arrival and will pass on photos.

There was another wonderful adoption today, that of Speedy. This little dog has been at the refuge since October 2013, and it must have felt like a lifetime for this little ball of energy. The lady who adopted him says she has another dog who is equally lively, so she is hoping they will wear each other out! Speedy will adore the freedom of being out of the refuge and already seemed to know that his life is about to change.

Sadly there were some new arrivals. A young black dog who has been wondering stray in Carcassonne for weeks was finally brought in. And we had two arrivals from Quillan, whom we have named Quirk and Quincy. Quincy is likely to leave us quickly (assuming the person to whom he is micro-chipped does not want to reclaim him), but I have taken a bit of a shine to Quirk, who is nervous at first, but sticks to you like glue once he knows you mean him no harm. He has gentle eyes, and I have promised we will find him a lovely home, as I do to all the new arrivals.

I say goodbye to Atlas. Note kiss-mark on leg 🙂 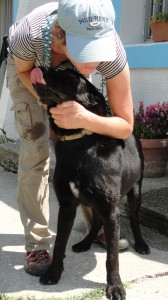 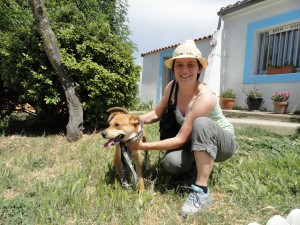 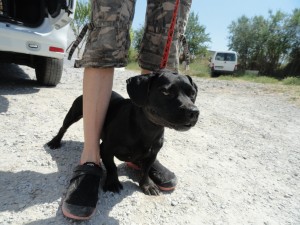 And his pal Quirk 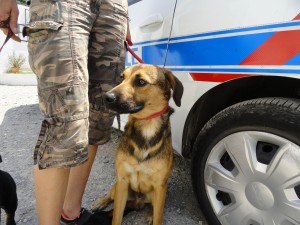 2014-06-12
Darcey Dyson
Previous: A quick in and out for an identified old dog!
Next: Three dogs leave, including an oldie :)