Home / Life After The Refuge / Barnie…

Posted by: Moira in Life After The Refuge September 28, 2018

It’s been 2½ months since Barney joined out family – here’s his story and a recent photo!
As soon as we saw Barney’s face on the Dog Rescue, Carcassonne website page, we knew he was the one for us!  We were told that he had been with a homeless person prior to the DRC, and that he was a very active dog who was in need of someone to bond with.  He certainly is active!  He loves playing games – sometimes it’s “throw and catch the ball”, sometimes it’s “try to get me to put the ball down so you can throw it again” !  He recently completed the CSF charity 5k walk (with me in tow of course!) – I thought he would sleep for the rest of the day, but by 6 o’clock, he was raring to go again!  “Come on Mum, where’s the ball? Lets go out and play!”
He’s bonded with both me and my husband.  We are able to give him lots of attention but, as long as we’re around, he’s quite happy to snooze the day away with one of his favourite cuddly toys (until play-time of course).
We’re so glad to have him in our family.  He’s even been trying to win the cat over – but his playful pouncing at her puts her off a bit, as you can imagine!  However, I know that before too long they’ll be curling up together.  It’s only been 2 and a bit months after all.
Thanks to DRC for keeping him until we found him! 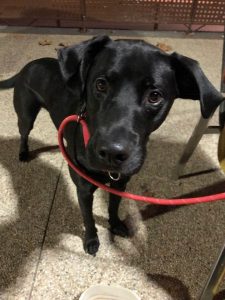