Today was another hot one, and apart from spraying the dogs, there was little we could do to make them more comfortable. People stayed away too, partly due to the heat, but mainly because very few people are willing to adopt at this time of year, with holidays approaching. If only they realised that this time is critical for us, as the SPA is filling up with dogs from all the people who refuse to make arrangements for their animals when they go away. We have a dog that was here at exactly the same time last year. As last year her owner will arrive just before the ten days “pound time” is up (ie before we are legally permitted to rehome the dog). This time we are going to ask for kennel fees , as that is what we are being used as. And of course it takes up a space for a dog who really IS homeless, not just one whose owner is irresponsible.

Three new dogs arrived today, one of them was a planned abandonment, of a 3 year old female beauceron, Fanta, adopted from us as a puppy but who jumps the family’s garden fence. No comment. The other two arrivals are beautiful beauceron pups, which brings the number of puppies at the refuge to 20. That is a lot of puppies for a refuge, and of course people often adopt puppies in preference to older dogs, meaning that our adults risk spending even longer behind bars.

No adoptions took place, so it is hard to give good news, however here is some! Do you remember Hoffen, the Montagne de Pyrenees who arrived at the refuge ten days ago weighing just 26kgs? Well here he is today, he has put on 10 kgs in as many days! At this rate we will be able to offer pony rides! It is wonderful to see a dog make such speedy progress, and yet again this proves that although every dog wants a home of his own, the refuge is not the worst place to be! 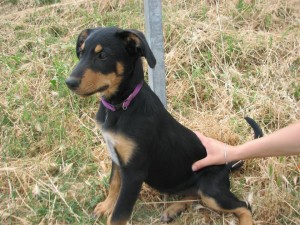 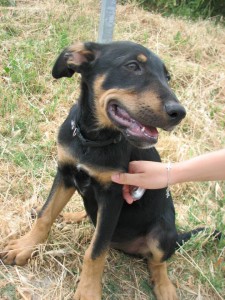 And look at Hoffen! 36 kg and growing healthier by the day! 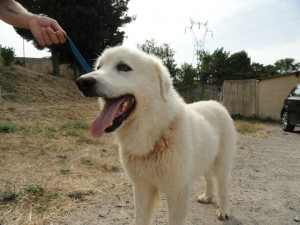