Home / Life After The Refuge / Benson

Posted by: Jane Hartley in Life After The Refuge December 5, 2014 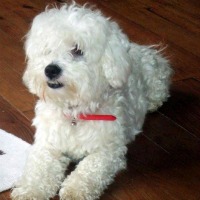 I can still remember the day we brought Benson home. My partner James and I had just finished an afternoon of dog walking at the SPA Carcassonne. Rowan, the former President of the refuge, told us to go look at the ‘ball of fluff’ that had just been brought in by the Gendarmes. We strolled over to the office to see Carole, the refuge secretary, holding onto a frightened, thin, and grubby little dog …his owner had been hospitalised and neglected to mention that she had a dog at home. Three days without food and water had passed by the time he was found. He was traumatised and needed a quiet place to recuperate from his ordeal. James and I agreed to foster him until his 10 days ‘pound time’ was over. I held him in my arms on the drive home, reassuringly stroking him. He stunk of stale cigarettes….so we named him Benson!

It was not long before we realised that Benson had been mistreated by his former owner. Over the next 10 days, he slowly put on weight and became more comfortable around us. We took him everywhere; he loved meeting other dogs and especially loved been taken out for walks. After careful introductions to our other resident animals, my three houserabbits, we decided that we would adopt Benson. This little Coton de Tulear had stolen my heart.

A few months passed and Benson’s confidence around us grew, but the realities of both his lack of socialisation and mistreatment became apparent. Benson was fearful of certain people and exhibited fear aggression. He cowered at the sight of a broom or at a hand raised anywhere near him (unintentionally of course). Living isolated in an apartment meant that certain outside noise absolutely terrified him. We were at our wits end; seeing our little chap petrified by certain people and things was stressful…for both him and us! On advice from Rowan and Moira, we decided to enrol Benson in dog training classes at a bilingual club in Azille. Shirley, the trainer, agreed that he needed socialisation and helped us to develop strategies to cope with his anxieties. Shirley, who has two rescue dogs herself, explained that Benson would be gently socialised with other people whilst learning new things and making new friends, both human and canine.

Slowly but surely, Benson has become a different dog. Although he is still fearful of certain people and noise, he is certainly less anxious in those situations. We now know that there is no ‘quick fix’ for anxiety issues, and he will always have insecurities. We want him to feel safe and secure and try to manage situations where he feels threatened. A rescue dog is like a box of chocolates, you never know what you are going to get. It has been a long, tough journey but I would not give him up for the world. As James puts it, he is our ‘dear little chap’. 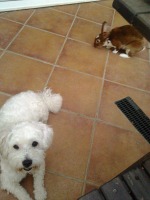 2014-12-05
Jane Hartley
Previous: Gisele pirouettes to freedom!
Next: A happy photo but much bad news.