Despite the threat of rain the refuge was very busy. Lots of volunteers were there to walk the dogs and lots of people were walking around looking for dogs and cats. The car park was really full and cars were parking on the verges down from the refuge!

It wasn’t long after opening when I saw a couple walking Badou. Once you see a dog that takes your fancy, taking them for a walk is a great way to get to know it.  All must have gone very well as the next thing I saw was Badou being lifted into the car!

Badou arrived at the refuge for the first time with a broken leg.  We are sure that he had been hit by a car and maybe that’s the reason he is so scared of them. He was soon adopted but his new mum found him to be too reactive around cars. We really hope that this home will be his forever one!

We also had a visit from Chris and Monica who adoped Alfie about two years ago and whose son adopted Pogo a couple of months ago. It was great to hear stories of how well Pogo was doing in his new home.

If you would like to come along and join the volunteer team keep an eye on the blog as we will be having induction days for new volunteers very soon. If you don’t fancy walking the dogs you can always come along and play in the parks with them, groom them or even cuddle the kittens. 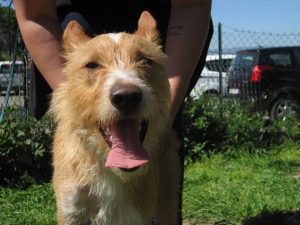