Well, something incredible happened today. We have known about it since Monday and the excitement has been palpable, but patience is a virtue.

Today our lovely boy Bench found his home. Not a new home, he found his REAL home. The story is complicated but basically involves a divorce and a husband supposedly rehoming the dog to someone in Corsica, but in fact leaving him to stray, which resulted in his being brought to the refuge. Bench arrived in July 2013, and several people have been interested in him. He was even featured in the British magazine Dogs Today, thanks to Moira, who quite often sends details of our dogs to this well- respected journal. In fact he nearly found a home due to this publicity, and it was only a matter of timing that stopped him hitching a ride to the UK with Rebecca and James in mid-January.

Like many of our dogs Bench (or Balou, to use his real name) has a sponsor at the SPA. Last weekend his sponsor, Chantal, did a wonderful montage for Bench. It was this that was spotted by Balou’s owner, who doesn’t even live in this department! She phoned the SPA on Monday and arranged to collect him. So anyone who wonders why people bother making montages and sharing pictures of dogs on Facebook, there is your answer!

Thanks so much Chantal!

Sadly not all the news was good, as three new dogs arrived. Lovely Calysta was found at Saissac and brought into the refuge by a couple we know and with whom Calysta had spent the night. She is okay with dogs and cats, so with any luck this young beauceron cross will find a home soon.

The other two arrivals are two setters, presumably brothers, who were found in Roullens. One of them made us think so much of dearly departed Alex (of blessed Doglinks), but we resisted the temptation to use the same name. Instead they are called Hunter and Barbour; good outdoor names for two countryside loving dogs!

Don’t forget it is the open day this Sunday, so why not come and see us! 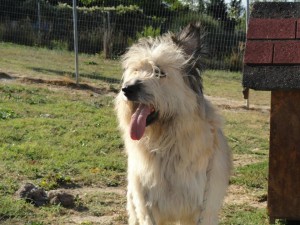 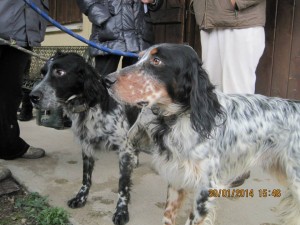