Day two of our open weekend and it was an early start for two of our volunteers!

When Fred ( ex Pepe) was found by the roadside, little did he know how much his life was going to change.

Without doubt this boy has had a hard life. Granted he is a bid breed Labrador cross but at only 10 years old he has cataracts, bad arthritis and had been left at the side of the road to die. What luck that he was spotted by Debbie’s friend who knew just who to call! He was of course covered in ticks and fleas, dehydrated and confused but nonetheless Debbie popped him into her car, kept him safe overnight and brought him to us the next day!

When Debbie told the story to Leanne who runs Twilight, a retirement home for older doggies, Leanne suggested that after his 10 day ‘pound’ time that he came to live out the rest of his life with their pack of about 30 elderly dogs. All of the dogs at Twilight live in the house with Leanne and Mike and have a wonderful life with good food, plenty of garden time, great vet care and of course lots of tlc! What a lucky boy, no concrete kennel for him!

So early this morning, he was picked up by volunteers Debbie and Julie and off he went. Once he has settled in I am sure that we will have lots of news of how he is doing. Thanks so much to the lady who spotted him in distress and called Debbie, to Debbie who helped this lovely boy and to Julie who helped with the transport.

Many, many thanks to Twilight. It’s not the first time that they have helped us out by taking an older doggie, we are very grateful!

Have a look for yourself at how wonderful a place Twilight is! (http://www.twilightchiens.com/)

The refuge was very busy this afternoon and we have two super reservations. Thanks to all of the volunteers and visitors who came along!

We would also like to say happy birthday to Benson who is six years old today and who was adopted by our volunteers Rebecca and James. He’s a lively little fellow who is loving life in the UK. He spends his days walking on the beaches or playing with his friends at doggy day care.

Fred who is now at Twilight! 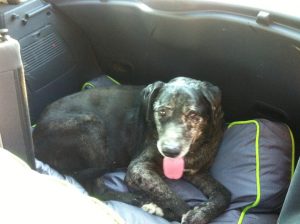 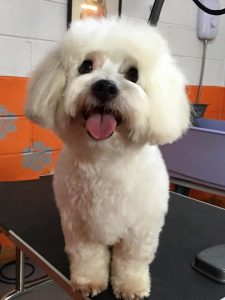