Home / Latest News / Catch up after a busy weekend

Catch up after a busy weekend

It has been a very busy few days at the refuge, and so it is high time we caught up.

There are two adoptions to tell you about; one of a young dog who we feared had been left behind, and one of an older dog who was brought in due to the illness of his owner.

First up, Caps. This young spaniel cross arrived in early August when he was five months old. As you probably know at the time we were inundated with puppies, many of whom were younger than Caps and getting a lot of attention, the way gorgeous young pups tend to. Meanwhile, of course, Caps was growing up and becoming an adolescent, and we worried that his window of opportunity for adoption was starting to close. Not that people don’t adopt adult dogs, but there is an awkward inbetween age when dogs are harder to home; they have lost their puppy cuteness, but are not exactly adults either.

In any case, all worked out fine for Caps, as a family who had already visited the refuge prior to this weekend decided to offer him a home, and so after some six weeks at the refuge, Caps’s new life has got underway. 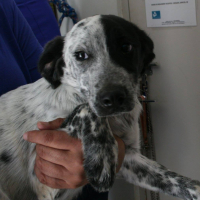 Second to leave was Gadjo, a seven year old Lhasa Apso, who arrived with beautiful German shepherd Lasko when their owner became too ill to look after them. At first these two dogs just lay comatose in their kennel, which was not easy to see. However after a week or so they were out on walks and showing their true personalities.

At 7 years old Gadjo is not a youngster but small dogs can live to be quite an age, and so it is no surprise that Gadjo should find a home so soon. His new dad is an elderly gentleman who has adopted from us before. We are very careful in such cases and have assurances that his daughter is ready to step in to help should the need arise.

Gadjo is a great little chap and we wish him lots of love in his new home. 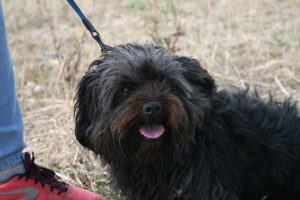 There were also plenty of dog walks and visitors, and for a couple of dogs the future is looking very bright, so watch this space, as they say!